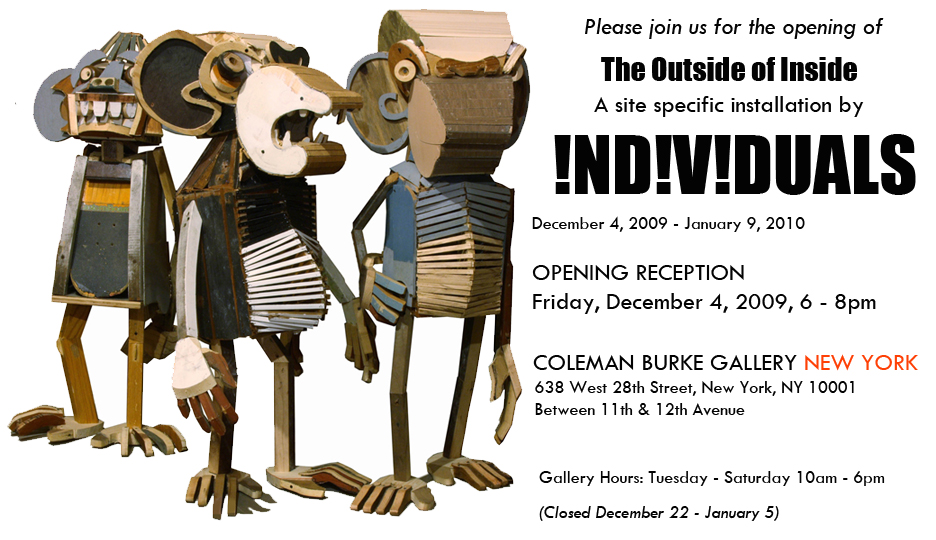 NEW YORK, NY – Coleman Burke Gallery is pleased to present “The Outside of Inside”, the New York debut exhibition of !ND!V!DUALS, the highly acclaimed artist collective comprised of cryptozoologists and dumpster-divers extraordinaire Luke O’Sullivan, Colin Driesch, Meers and Dom Casserly.  These artists play dual roles as both skilled artisans and mad doctors as they transmute found and recycled materials into surprisingly inventive anthropomorphic creatures.

“The Outside of Inside” is an installation featuring several large-scale and small-scale sculptures of animal hybrids, who much like their creators, vary in moments of antic disposition, excitement and complicity.  To create a context for the sculptures’ anthropomorphic hijinks, landscape paintings in ornate frames occupy the walls with graphic paint-pen drawings of animals added to them, serving as a home and peripheral extension to the transgenic species beside them.

“The narrative is fairly open, it’s about living with these things, being transported into their world, even if just for a second.” – Luke O’Sullivan

Inspired by biological mutations as well as the mutations that are often exhibited by their favorite superheroes, !ND!V!DUALS’ installation pieces present a humorous but poetically lucid, ethical critique of genetically modified organisms and where this practice might lead. The playfully anti-social nature of the characters in their tableaus, while loveable in one sense, is also meant as a warning about the possible outcomes of fooling with mother nature. Like the products of genetic engineering, these characters, birthed by human imagination and ingenuity, could just as easily turn on us.

Its very difficult to reach a creative consensus in collaborative groups, something must be accepted rather than wanted…not with !ND!V!DUALS!  A more Darwinian method is utilized, where one must coerce the other in uncompromised submission.

“The only creative arguments that come up are solved by Greco-Roman wrestling. We fight each other, in the studio, on the spot. The winner makes the decision. The loser lives with it and we go on. Simple. Boom.” – Dom Casserly

Individuals got its start when Dom Casserly and Meers, who grew up together in Holliston, Massachusetts, met Colin Driesch as first-year students at The Massachusetts College of Art, in 2002. Joined a year later by Luke O’Sullivan, who was studying at the Art Institute of Boston, their first joint project was a triple bunk-bed nicknamed Death Trap 2000.