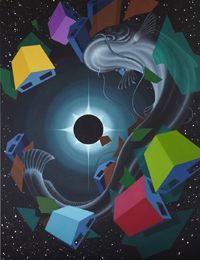 In his new exhibition NAMAZU-Eclipse Eske Kath moves his works into a space bordered on one side by destructive threat and on the other colorful vitality.
In the Japanese myth of the “Namazu”, the eponymous giant catfish rests in the mud under Japan and is kept in check by a holy stone yielded by the god Kashima. Whenever Kashima lets go of the stone Namazu causes earthquakes by moving around. Not doing this by intent, but rather by nature, Namazu is often depictured, not only as a destroyer, but also as catalyzing economic growth and development for the survivors.

Traditionally this cycle of destruction and reconstruction was depicted in Japanese woodcuts called Namazu-e, casting Namazu, often shown as a man with a fishhead, as both a villain and a rectifier. Kath considers his pieces his own Namazu-e. In his works the Namazu could be viewed as nature itself setting houses, representing our structured world, in rotation and throwing them around as Lego bricks.

Following this train of thought NAMAZU-Eclipse is based on old beliefs and myths being continuously replaced by new ones that in turn will be replaced by others. Just as science has taken the place of religion and so forth.

In NAMAZU-Eclipse the Danish artist juxtaposes the Namazu, not only to newer times, but also to another symbol: the sun – the epitome of life, light and warmth. However, at present the sun is not only used to evoke positive associations. Global warming, cancer, radiation as well as science showing that the sun will burn up the earth in some billion years, is beginning to overshadow the traditional life-giving symbolism of the sun.
Eske Kath skillfully uses the old Japanese Namazu myth as a negative symbol of devastation, but one which, also has the positive traits of a rectifier and redeemer. In direct relation to that there is the original and positive symbol of the sun as a Creator force, though tainted by a dark side of destruction.

In the gallery these ideas and concepts are represented by a floor installation, as well as a variety of sculptures, paintingsand collages on the walls, the contemporary Namazu-e of Eske Kath.