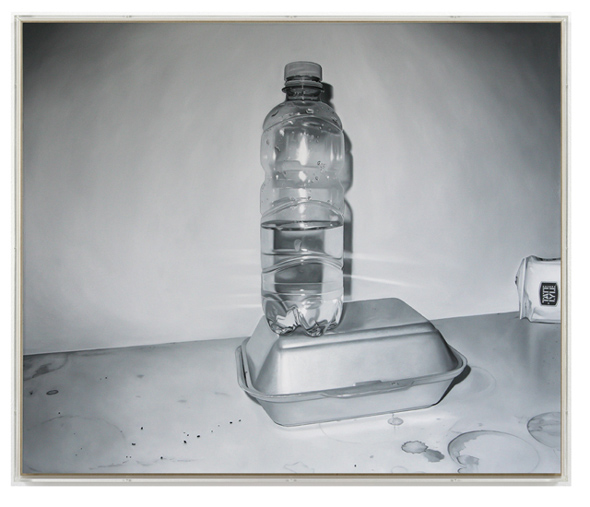 Max Wigram Gallery is proud to announce an exhibition of new paintings by James White.
The works continue White’s archiving of the minutiae of modern life. His black and white oil paintings on plywood panels are composed from the snapshots the artist takes of the objects that surround him.

Like the cinematic ‘cutaway shot’, White’s images are deliberately emptied of any dramatic content of their own; our focus momentarily rests on an intimate group of objects that silently resonate within a grander scheme. In refusing to acknowledge a wider visual world, White’s exacting gaze suggests an external narrative in much the same way that the simple image of a drinking glass might when scrutinized within the context of a crime scene photograph.

Rather than merely celebrating the inherent beauty of the banal, White’s paintings are iconic, subtle reflections on the quotidian. Despite the sense of intimacy within the work, the artist equally distances the viewer from the scenes he represents. This detachment is intensified by the characteristic absence of colour and the presentation of the paintings encapsulated in Perspex box-like frames.

The paintings in the show derive from photographs taken mainly in hotel rooms and the artist’s studio. Both locations exacerbate the sense of isolation and quiet respite from the day to day. 2.40 am (Berlin Hotel) and 2.45 am (Berlin Hotel) show personal objects scattered around a hotel room where the artist is spending a sleepless night. These personal belongings are the only reminders of the artist’s presence in the room, the sole evidence of the occupier within an otherwise totally impersonal space.

Hangers (home) and Hangers (away) show the inside of two wardrobes, one in the artist’s home, the other in a hotel. In each painting, a single empty coat hanger dominates, reinforcing a feeling of absence and dislocation.

Burgerbox shows the remains of lunch in the artist’s studio. Here, and in Milk and Stuff and The Radio, we are reminded of the solitary nature of life in the studio. Removed from any significant action, the featured objects are however witnesses to the artist’s activity. Rendered immaculately, with impeccable attention to detail, these simple still lives conjure up human presence through its very absence.