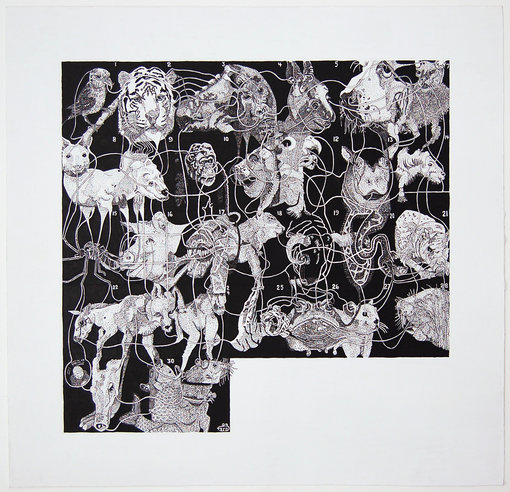 Hales Gallery is pleased to announce the first solo exhibition by New York based artist Martin Wilner. Making history: UK features twelve pen, ink, and graphite drawings, each representing a month in 2009 and are a continuation of Wilner’s ongoing work Making History. Also on view will be recent examples of Wilner’s other ongoing project, Journal of Evidence Weekly.

Wilner’s series Making History uses the convention of the Roman calendar to capture the dimension of time. He deconstructed various elements of newspapers and magazines, selecting images, texts, and maps to create monthly drawings that are the result of a game of cadavre exquis played solitaire. Each total drawing is comprised of all the days of the particular month it was worked on.

For Making History: 2009, Wilner decided to utilise British newspapers for the entire year as source material for his appropriationist draftsmanship, primarily The Guardian, but also The Times, The Daily Telegraph, The Independent and even The Sun. Wilner found himself as an artist, increasingly involved in a reverse migratory process akin to the 19th Century social scientist Alexis de Tocqueville in his renowned study Democracy in America. While Wilner remained physically in the United States, he was able to have the virtual experience of life in the United Kingdom through the prism of its online media. He became increasingly fascinated with British journalists’ lack of concern to conceal their political bias and to find that in a nation of libel tourism, journalists themselves drift regularly into the scandalous, in often-hilarious fashion.

2009 saw the worst international economic recession since the Great Depression of 1929, and a year of worsening climatic devastation. Making History: May 2009 tells the tale of the collapse of the American auto industry, which in our globalized planet, resulted literally in a massive pile-up. Wilner often turns to the animal kingdom, as he does in Making History: March 2009 to metaphorically narrate our relationship to other species, many endangered largely at our own hands. Making History: April 2009 became a rogue’s gallery of mass murderers and mayhem makers and Making History: July 2009 became a kind of revisit to Krafft Ebbing’s Psychophathia Sexualis. And as a departure from Wilner’s self imposed representational parameters of the year, Making History: September 2009 made use of selections from musical scores to create a kind of soundtrack to the cinematic visuals of the rest of the year, a nocturne composed from the detritus of daily events.

Journal of Evidence Weekly stems directly from a feverish dream in which he dreamt that he was about to miss a deadline for a periodical of that same name. As a practicing psychiatrist, Wilner proceeded to self-analyze the dream associatively. His first association was to the acronym of the periodical, which was J-E-W. As a child of Jewish Holocaust survivors, he realised that there was great personal significance to this dreamed reference to responsibility and history. He chose to bring the dream into reality by creating an ongoing series of books of drawings executed entirely while he is in transit, primarily in the subterranean realm of the New York City subway system. The books are mostly in variants of a leporello format, one that structurally conveys the elements of motion over time. Recent volumes have become attempts at capturing the acoustic nature of this world in transit, the snippets of overheard conversation, the plea of the beggar, the muttering of the insane, the announcements of the conductor and the screech of the braking train. This sensuous cacophony is illuminated with strangely fetishistic disembodied elements of figuration, a leg here, a chest there, a grasping hand, and a desperate visage.