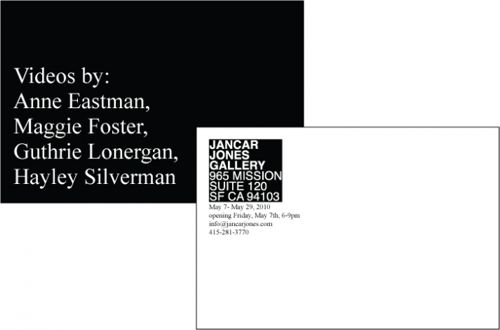 Anne Eastman makes sculpture and video that, although highly formal, invokes
a destabilizing effect. Through the documentation of her exhibition
installations she creates a sense of disorientation, calling into question
what is being perceived. Her work has been exhibited, most recently, at
Claudia Groeflin Galerie in Zurich, ATM Gallery, Frederick Petzel Gallery and
Guild and Greyskul in New York. She is a founding member of
B&rsquo;L&rsquo;ing, an art collective that screens and trades bootleg video
art and rare media. Eastman received her MA in sculpture from Yale
University. She lives and works in Brooklyn, New York.

Maggie Foster is a San Francisco-based video artist. In Untitled (2009)
Foster creates a machine that makes distance. Characteristically, she
examines a deliberate mediation of experience and atmosphere. Her work has
been exhibited at Pool Gallery, Berlin, Artist Television Access and Little
Tree Gallery in San Francisco, Casa Cuadrada Arte Contemporaneo in Bogotá,
Colombia and at the WRO Center in Wroclaw, Poland. She received her BFA in
New Genres from the San Francisco Art Institute.

A founding member of the Internet surfing club Nasty Nets, Guthrie
Lonergan&rsquo;s body of work addresses the language and conventions of the
Internet through the appropriation of stock imagery, subtly linking the
virtual space of the web to the more restrained or banal interiors of the
gallery or bedroom. Lonergan&rsquo;s work has been exhibited at the New
Museum and Spencer Brownstone Gallery in New York and was included in the
Internet Pavilion at the Venice Biennial in 2009. He received his BA from the
University of California, Los Angeles. He lives and works in Hollywood,
California.

Hayley Silverman, like Lonergan, engages in the discourse between the virtual
and the &ldquo;real.&rdquo; Through her implementation of both video and
sculpture, often integrated, she straddles the divide, manipulating volume
digitally and physically. Her work was recently exhibited at Open Space
Gallery, Baltimore and Kunstverein, New York and will be included in upcoming
exhibits at Peer to Space, Munich and the Netherlands Media Art Institute,
Holland. Silverman received her BFA in Interdisciplinary Sculptural Studies
with a concentration in Interactive Media from the Maryland Institute College
of Art, Baltimore, Maryland. She lives and works in Berlin.