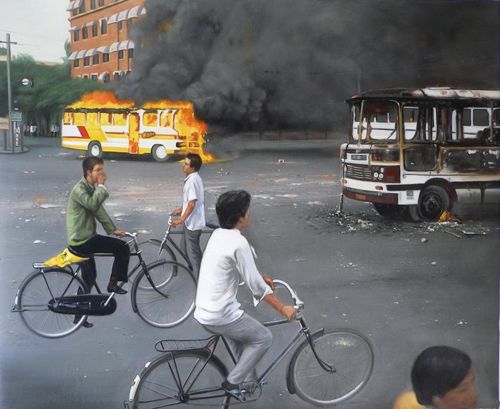 Charlie James Gallery is pleased to announce the gallery’s first solo show of Bay Area conceptualist Lizabeth Eva Rossof.  In “Hey, China!” Lizabeth will exhibit paintings and sculptures commissioned and fabricated by workers in the People’s Republic of China.  Uniting all of the paintings in the show is the politically sensitive subject matter depicted throughout.  There are images from the Tiananmen Square massacre (otherwise known in the People’s Republic of China (PRC) as the “June 4th Incident”)), images concerning Tibetan liberation, the Falun Gong spiritual movement, as well as images culled from pornographic websites blocked in the PRC.  In point of fact, every painting in the show is of content deemed illegal in the PRC, with the source images taken from websites currently blocked in the PRC, made by workers in the PRC.

Another thread in the show is American media’s global influence, and the PRC’s industry of counterfeiting the copyrighted properties held by American media.  Lizabeth playfully delivers these concerns through the presentation of a revised Terra Cotta Army consisting of 50 eighteen-inch soldiers on a riser in the center of the gallery space.  The soldiers are quite authentic in their composition and detail, and they take five discrete poses: Kneeling Warrior, Warrior Priest, and three Infantry poses.  Distinct from the warriors of the First Emperor of Qin, discovered in 1974 by farmers in Xi’an, China, the members of Lizabeth’s Army have had their heads replaced with those of notable figures from American popular culture.  A Warrior Priest may have the head of a Disney character or of a mascot from a fast food chain.  The heads of recognizable figures from television shows, comic books and films complete the ensemble.

The engagement of Chinese artisans in the creation of these paintings and sculptures adds a performative element to the show.  These “Master Painters” in China dutifully reproduced every image Lizabeth sent to them, despite very real legal risks, which prohibit the mention of the painting firm by name in this release.  Subsequent to the painting and sculptural fabrication, which Lizabeth supervised via Skype from her home in San Francisco, the paintings had to be effectively smuggled out of the country.  The unstretched canvases were carefully packaged amongst reproductions of famous paintings arranged carefully to be the first images seen if the package was opened in Chinese customs, which it was.

This extra-legal aspect serves as a conceptual flourish that unites all of the works in the show. The daring ruse that brought them into being expands their definition as art objects and elevates their commentary on the PRC.

Lizabeth Eva Rossof’s  (b 1973, USA) work examines the distribution of personal, political, economic, and sexual power and freedom in the digital age. Her artworks are experiments; they are projects and investigations. Lizabeth has been the recipient of many prestigious academic awards including the Thomas J. Watson Award and the Jacob K. Javits Award, as well as several artist honors including The San Francisco Art Commission’s Murphy Award, C5’s Gran Prix at ISEA 2006.  Lizabeth exhibited in Takashi Murakami’s GEISAI Miami.   She has completed residencies at Montalvo Center for the Arts and Anderson Ranch Arts Center, and has been awarded residencies at Cite International de Paris and CAMAC: Centre des Artes Marnay in France. Lizabeth’s artwork has been exhibited in Berlin, Chicago, Los Angeles, Melbourne, Miami, New York, Oaxaca, Osaka, Aspen, and at the National Center for Contemporary Art in Moscow.