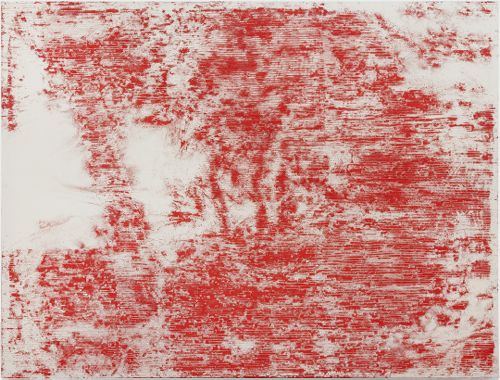 It is a great pleasure for Andersen’s Contemporary to present LAGO, Aurelia Sellin’s second solo exhibition
with the gallery and the artist’s first solo exhibition in Berlin. The exhibition displays 12 new paintings.
Sellin’s paintings seem to connect two contradictory tendencies. On the one hand they reduce elemental parts
of nature i.e. a landscape, a beach, the sea, a sunset, the moon, a mountain, to their most refined essences.
The motives are refined to a degree, where they render natural phenomena in what one might call its most
primitive, pure or primal form. Sellin thus touches upon a possible human collective unconsciousness and
memory, investigating images that seem almost universal, embedded in all human beings.
On the other hand Sellin’s works address painting itself, as a media, as a method, and as an object. She in-
vestigates the most basic and fundamental implements of painting: paint and canvas and all elements – i.e.
oil paint, canvas, composition, and brushstrokes – are individually revealed and evident. Sellin’s works are
thus concerned with two-dimensionality, whereas classical landscape painting was grounded in illusionism. In
classical landscape painting, the motive and the painterly execution merge and melt into each other, however
in Sellin’s paintings both landscape and painterly execution stay fully separated and itemized. Thus at first
glance the viewer is denied an entry point to the work, and is confronted with the painting itself.
Sellin derives her motives, from stereotypical postcards of impressive scenery, natural idyll and picturesque
village-atmosphere. Postcards show the typical; often even the stereotypical, removing the image entirely
from reality into the realms of memory and reminiscence; into mythology. Recognizing that postcard com-
positions are very often purified, condensed, and retouched to make the image aesthetically pleasing and
generic for multiple viewers, Sellin intuitively extracts sections from the postcards. The sections, which makes
it atmospheric; the elements, which makes it picturesque; and equally important: the elements that can be
transferred into a semi-abstract painting.
Thus Sellin utilizes the basic elements of nature to investigate the basic elements of painting. She accentuates
the elements of that appeal to collective memory, but in the same time she induces paintings that balance on
the borderline between figuration and mere abstraction.

Aurelia Sellin is a graduate from the Staatliche Akademie der Bildenden Künste in Karlsruhe where she stud-
ied under Andreas Slominski. Aurelia Sellin was born in 1979 in Heidelberg, Germany and currently lives and
works in Berlin.