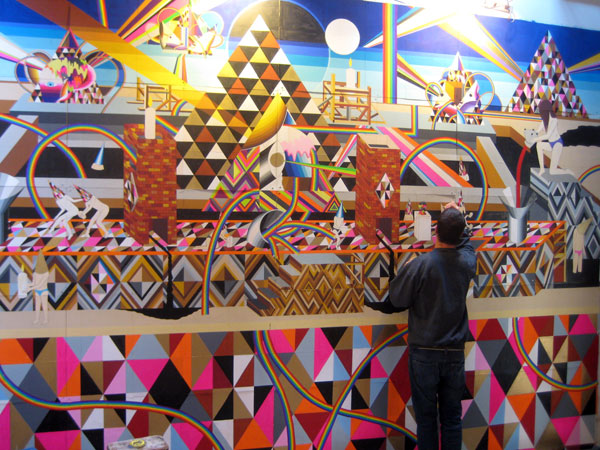 In this most recent body of work, Colman shows the struggles of the architect working “behind the scenes” of the elaborate; both beautiful and claustrophobic among landscapes and artifacts. Richard’s work demonstrates a unique language drawing on the intricacies of an Indian Miniature, to the antiquity of the more abstract and symbolic nature of Byzantine art. Colman’s patterns have the repetition and geometry associated with Islamic tiles and mosaics. Narratives depict day-glo orgies, fusing the sinister with the comical. A pantheon of internalized imagery and shared iconography comes into play in the shape of occult symbols, silhouettes, and rainbow sprays of color, piles of viscera, in a concoction of violence and ecstasy.

The subjects of his paintings-from headless bears to naked men-are presented in a theatrical way, like actors in a play, standing in formation. The work captures the feeling of being frozen on stage, anticipating what will come next and never quite finding out.

The title of the show, “Keep Out the Light,” references the density of Colman’s work, as well as his obsessive work habits, serving as a sort of escape for the artist. The works in this new exhibition exhibit the strength of obsessive patterning and imagery to drive away the delusions of everyday life.

Colman will be constructing a space within the gallery that will both highlight the work and invite viewers to step into the art and explore and experience the landscape of “Keep Out the Light”.

About Richard Colman
Colman was born in 1976 and grew up in Bethesda, Maryland, a suburb of Washington, D.C. Colman graduated from the School of the Museum of Fine Arts, Boston, Massachusetts, in 2002. He has exhibited extensively throughout the world in solo and group exhibitions including Krets, Malmo Sweeden, V1 Gallery, Copenhagen, Denmark, Merry Karnowsky Gallery, Los Angeles, Union Gallery, London, UK and ARKEN Museum Of Modern Art, Denmark.  In 2006, Gingko Press released a book cataloging his work titled “I Was Just Leaving.” Colman currently lives and works in San Francisco, California. www.richardcolmanart.com

About New Image Art Gallery
Marsea Goldberg, founder and director of New Image Art, started the gallery in 1994 in her 10 by 10 design studio. Since then, the gallery has grown to attract a global cult following, grabbing the interest of art lovers and collectors worldwide. Renowned for her discriminating eye and solid curatorial skills, New Image Art Gallery continues to show the works of established and emerging artists coming out of the street, skate, fine art and surf scenes. Over the years, the gallery has launched or mobilized the careers of Shepard Fairey, Ed Templeton, Jo Jackson, Chris Johanson, Rich Jacobs, Rebecca Westcott, Neckface, Cleon Peterson, Megan Whitmarsh, Faile, Tauba Auerbach, Matt Leines, the Date Farmers, Judith Supine, and Bäst, just to name a few.