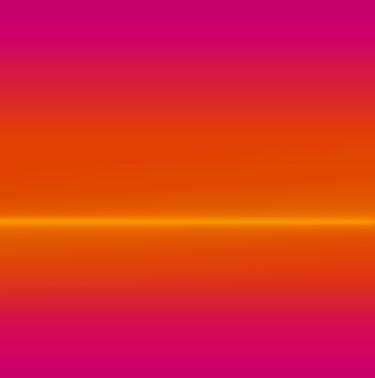 GERING & LóPEZ GALLERY is pleased to present JOSÉ Mª YTURRALDE: Horizons. This is the Spanish artist’s second exhibition with the gallery in New York.

This exhibition consists of Yturralde’s newest series, which further delves into his exploration of the phenomenology of perception through the discipline of painting. Long concerned with Gestalt theory and the figure/ground relationship, Yturralde introduces distinct lines into his color fields, not unlike the zips of Barnett Newman. These “horizon” lines differ from Newman in that Yturralde has spun them on different axes, altering our spatial understanding of his pictorial expanse. The boundaries of the picture plane are thus grounded around clear and intentional horizon lines, orienting the viewer in Yturralde’s often all-consuming voids of beautiful color.

These canvases serve as metarational meditations on a wide range of intellectual and spiritual interests of the artist. Yturralde’s work involves an interplay between the immanent and the transcendent; the works appear in front of the viewer as contained canvases and yet they transcend the constraints of the medium to evoke a metaphysical experience of limitless space and light. The Horizon works demonstrate a new phase in Yturralde’s study of chromatology, as the more severely striated color fields seem to emit an energy associated with the hues’ spectral locations. Constructed with the help of mathematics and physics, these paintings produce an organic sensation that touches on the sacred, as Yturralde melds science and religion to create powerful works that stretch the viewer’s understanding of their own perceptual expectations.