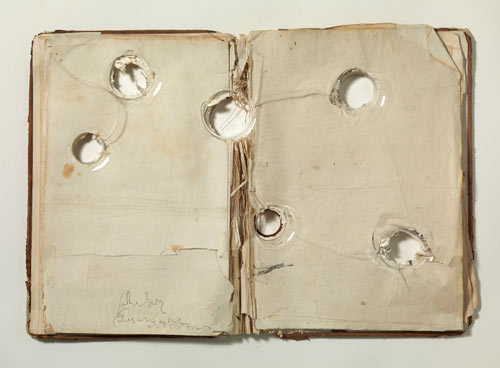 With this new body of work, Jordi Alcaraz continues to play with dimension and spatial perception and illusion with a special attention on literature and the use of books. The essence of literature can be found in the written word laid upon paper. Ink is formed into letters, then into words, and further into text. As Alcaraz focuses on the material aspects of writing by reducing them to their physical elements for artistic and compositional purposes, there is a parallel between the work he creates and the literature that these materials represent; both transforming books, paper, and ink into windows for our imagination.

Jordi Alcaraz also continues to use familiar materials like plexi, mirrored orbs and substantial frames in creative and inventive ways to allow the play of light and shadows to be part of the compositions. And although the resulting works are serious and challenging, they are also always infused with humor and wit.

Jordi Alcaraz was born in Calella, Spain in 1963 and currently lives and works in Barcelona. His works have been shown at numerous exhibitions around the world, including the Museu de Pintura de Sant Pol de Mar and the Museu de Sabadell in Barcelona. A newly published and extensive catalogue will accompany the exhibition.