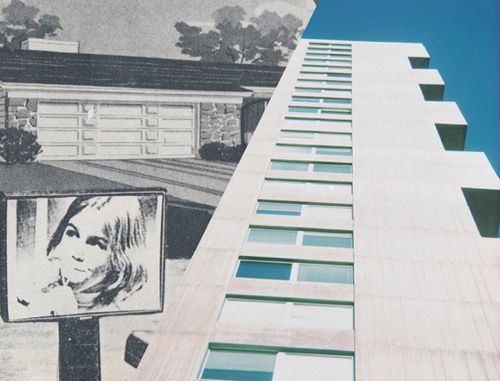 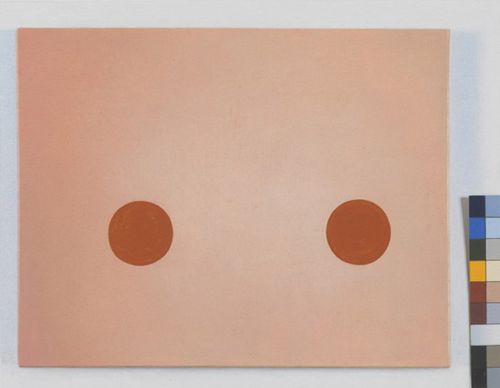 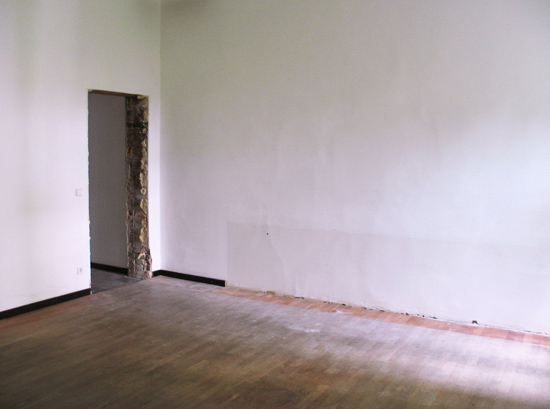 Johnen Galerie is pleased to present the first solo exhibition of Roman Ondák in conjunction with the unveiling their  new gallery space in Mitte at Mariennstrasse. Roman Ondák is currently showing at the 2009 Venice Biennale (Slovakian Pavilion), MoMA in New York and the Hamburger Bahnhof exhibition, “Die Kunst ist super!”

The selection of early works from 1996-2001 all pertain to the idea of space and its perception. Shared Floor, 1996, Untitled (Wall), 1997, Freed Doorway, 1998 and Untitled, 1998 are each made from real found elements from different apartments and galleries. Each element refers directly to architectural structures of these former sites, although when originally in situ, they were in a certain sense invisible: the objects were such an inherent part of any room that the viewer did not pay any particular attention to them.

In Shared Floor, for example, the parquet flooring of a room was removed and then reassembled in the outline of its original shape on the gallery floor. The electric sockets from the same room were dismantled and affixed to metal rods, which were then attached to the parquet floor, thus simulating their original positions in the walls while retaining the same spatial relationship to the floor.

Freed Doorway shows a door that has been cropped: its edges have been cut and the door itself is now dysfunctional. It has been negated from its relation to the doorframe to which it belonged. The door now leans against the wall of a gallery.

Untitled occupies the whole room with only several tiny pieces, such as electric sockets and traces of water pipes. They are pushed out a few centimeters from the wall by metal rods, thereby implying the surface of a fictional wall, which could stand in front of the real gallery wall.
A panel from a gallery has been relocated to the exhibition in Untitled (Wall). The panel leans against the wall, as if it were a remnant from the construction of the exhibition. Upon closer inspection, however, one notices that the panel still has an electric socket completely intact, while its back casing remains hidden behind the panel in the gallery wall.

In addition, there are two works that directly link the gallery’s interior with its exterior. The work Colour and Size, 1999 draws from the view of the trees in the gallery windows of the rear room. One window is left open and next to it, a white shoe box has been installed. With a circle cut out in the front and its top slightly sloping on the sides, the shoebox is reminiscent of a birdhouse. Below the hole is the shoebox’s original sticker that reads, “Colour/Black; Size/36,” which absurdly conflates the description of shoes with the taxonomy of birds: it seems to say that only those birds that are black and can fit in the 36mm hole are allowed to enter.

Untitled (Traffic), 2001 consists of a red emergency-exit hammer that has been removed from a bus and installed next to the window of the gallery. The windows of the gallery make a strange reference to a bus, especially when such a hammer is installed next to the windows: its very presence summons visions of undesirable but possible bus accidents. Moreover, in the gallery, it suggests that the viewer might yet find one more way to leave the exhibition other than the way he came in.

The new Gallery Building on Marienstrasse 10, formly the location of the architect O. M. Ungers’ Berlin office, houses Johnen Galerie, Krobath, and ph-projects. It is a block away from the Boros Collection and minutes from the Hamburger Bahnhof. Johnen Galerie artist Robert Kusmirowski will transform the staircase into a large installation. He will have a solo exhibition at the Barbican Art Gallery from September 30 – January 2010 and is also exhibiting at the current Hamburger Bahnhof exhibition “Die Kunst ist super”. Johnen Galerie will participate in Art Forum Berlin in Hall 20 Booth 136 from September 24.