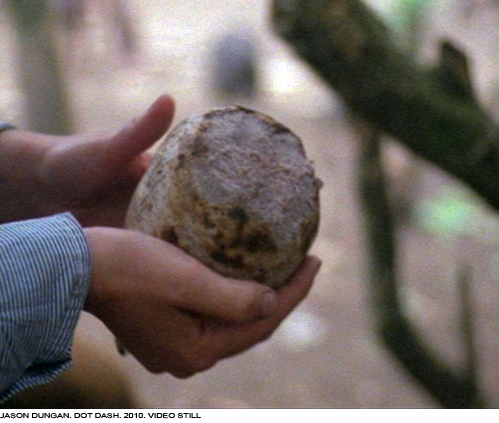 Nicholas Robinson Gallery is pleased to present Dot Dash, a new single channel video by filmmaker Jason Dungan.
Filmed entirely on the islands of Tanna and Efate in Vanuatu, Dot Dash articulates a version of island life, greatly informed by the legacy of Post-colonialism. The video opens with a long, non-narrative sequence of still imagery, each depicting various natural and man-made objects on the island: a hand holding a yam, a satellite dish, tree roots, a man repairing a car, palm fronds, men raising an American flag on bamboo poles in uniform. Throughout the film, Dungan overlays both sequences of Morse code and as his own voice-overs to investigate how language is complicated by different cultures. The film presents an anti-narrative of local life: American and local flags are raised and lowered, yams are cultivated in a lush tropical garden, billboards illustrate people in “traditional” dress speaking on a cell phone.

Dungan weaves together images to suggest words or sentences, a private language known only perhaps to the film itself. Some scenes reveal muted conversations, but we are unable to hear what is being said. In other sections, voiceovers move from a matter-of-fact description of yam cultivation to a fanciful idea about running film up a flagpole, or burying a can of celluloid in the earth. Could a film be made about a place without the use of a camera, simply by letting the film “soak up” or experience the environment? If the film is suggesting that objects themselves are informed by language, it is also implies that the objects will go on communicating whether there is someone to hear it or not.