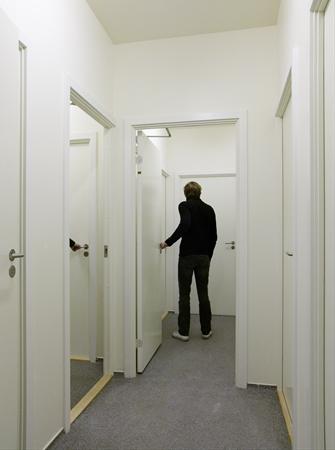 Ikon Eastside presents Hitchcock Hallway, an installation by Danish artist
duo AVPD, whose work typically consists of complex spatial and perceptual
experiments that analyse the ways in which people respond to their environments. The title makes reference to director Alfred Hitchcock who
employed spatial effects to create psychological intensity in many of his films. This major new work, commissioned by Ikon, sees the entrance to the gallery replaced by a door. What lies beyond is for the visitor to discover.

In addition, the artists have produced a number of off-site projects around
Birmingham. At Ikon, Brindleyplace a window at the gallery entrance is
covered by multiple layers of glass in Conceal; paradoxically, with each
transparent sheet the window becomes more opaque. Meanwhile in locations around the city, Level, a series of simple graphic posters appear, black with a white horizontal line, each one subtly different, exploring memory, recognition and expectation. A fourth project, Rotobjects, is a discreet, unpublicised, sculptural action – white Perspex objects, each the shape and size of a drinks can, are abandoned at the top of public escalators around Birmingham – there they will rotate, hypnotically, until removed.

AVPD are Aslak Vibæk and Peter Døssing, both graduates of The Royal
Danish Academy of Fine Arts. Often inspired by ways in which space is
re-imagined in literature, film and science, their works challenge socially
conditioned or innate perceptual habits, emphasising how our bodies ‘read’
spaces and react to them, be it physically, intuitively and intellectually. They
see the human subject as defined by space; shaping it and in turn being
shaped by it, and as such their experiments with constructions are suggestive of new possibilities for imaginative space.