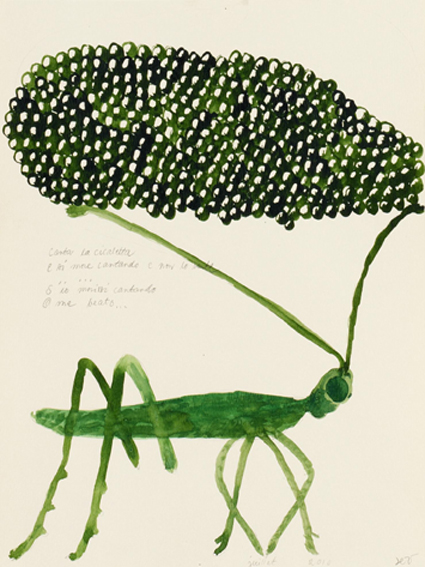 “What happens along the way is almost always more
important than the destination of the journey.
The same is true of painting. In front of a
finished canvas one should only remember the
temptations of the ditch by the wayside. Remember
what hurt, and what made you laugh between
breakfast and wine in the evening. The
fortune-telling dregs in the coffee cup, the ones
that never really dried. The wet patch in
freshly-laid concrete that clearly showed the Owl
of Minerva winking but then dried and
disappeared. A destroyed anthill and the
architecture of hornets. A recollection of my
father’s tears, which were the tears of a giant.

Not everything becomes attached to paper or
canvas. Not even laughter. A picture of laughter
is nothing more than a little frolic around an
agreed word. But neither do clowns make people
laugh. They’re not supposed to. They’re the
oldest members of the circus, who knew all its
tricks from fire-eating to death-defying leaps.
It’s also called professionalism. It does not
rely on inspiration. Their skill has been
condensed into naive and deep action. For can
there be anything sweeter, deeper in meaning,
than licking a postage stamp that is too small with a tongue that is too big?

It is in a manner something like this that I hope
I can paint. Without any mission. Only daily
bewilderment before colours, forms and
opportunities. I don’t want to create anything
that follows a definite line. On the contrary. As
soon as a line or style begins to emerge, I
reject it. A style is a suit of armour that is
useful only to those who watch jousting at a distance.

If I were to believe in something higher, a
higher hand, I would like to be a marionette made
to paint. Heinrich von Kleist says that “the
movement of a person without mannerisms can be
performed only by a marionette portraying a human
being.” In front of an easel with the feet six
inches above the stage. But since, to my
knowledge, there are no higher hands I have to
covet the law-like nature of change. Or then to create randomness myself.”