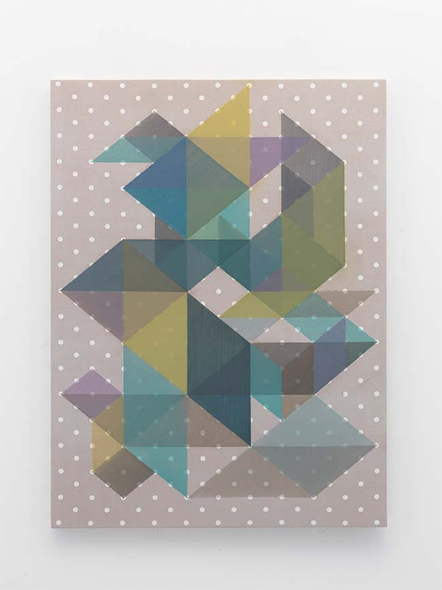 The viewer is confronted with a collection of paintings that all seem to be running to their own irregular logic. These are paintings that unravel, inviting the viewer to slowly decipher and navigate their path through contradictory planes of translucent colour.

James Ryan’s paintings focus on the exploration of an implied three-dimensional space onto a physical two dimensional surface. Starting from simple line drawings or a photograph each painting is created using the same repetitive process of overlaid, transparent geometric forms which are allowed to develop intuitively by straying away from their source material.

As well as continuing to work with long standing motifs such as isometric cubes and freeform geometric structures, Ryan has introduced commercial patterned fabrics as painting supports which extend the readings of his work. On a material level the fabrics offer a ready-made grid of sorts, albeit in polka-dot or chequered gingham that generate domestic connotations. Visually however, the combination of printed pattern and painted geometric form produce odd visual moments and figure/ground relationships as design and paint freely interplay over the surface of the canvas.

The word Glitch is most commonly used in computing and electronics to describe a temporary fault in a system. The term is also used in video games where a player exploits a fault in the game’s programming. Glitch is exploited here in much the same way, referring to the optical and spatial irregularities generated by the painting process. Ryan’s looser areas of paint handling counteract the work’s hard-edged pretence. It is these faults and irregularities that produce paintings that are readable without being fully understandable, stationary without being fixed.

James Ryan was born 1982. He completed his MA in Painting at The Royal College of Art, London in 2007, since then has exhibited regularly in group exhibitions and has had two solo exhibitions at Studio 1.1, London, 2009 and the Corn Exchange Gallery in Edinburgh, 2008.