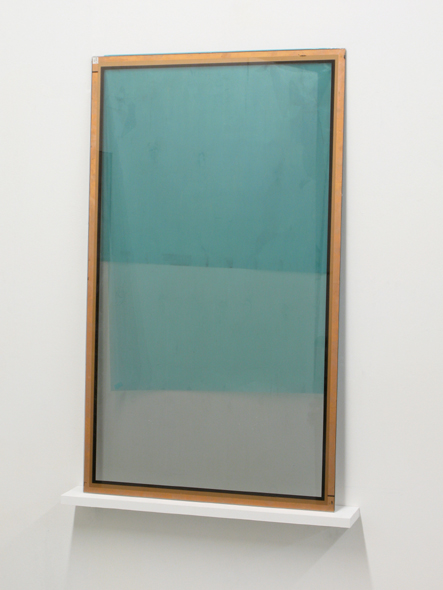 The word grammar derives from the Greek grammatik techn meaning ‘art of letters’, and from gramma ‘letter’, itself from graphein ‘to draw, to write’.

Grammar See includes four artists who construct their own rules of language across painting and sculpture. Varying in form each artist approaches these traditions and the cross pollination between them differently and independently. Referencing Gramercy Park in the title is such that the park layout represents one of the earliest attempts in the United States at ‘City Planning’. The secluded Manhattan park is only one of two private parks in New York City where the closest local residents are allowed access by key for an annual fee. Association is two fold; art school systems similarly script the broad subjects of painting and sculpture into carefully selected yearly structures. A grammar where certain information is not acquired by conscious study or instruction, but by observing other ‘speakers’. Every speaker of a language has in their head a set of rules for using that language. Grammar acts as the set of structural rules that govern the composition of form in any given natural language and refers to the study of such rules. The selected artists unlock the boundaries of these two mediums and challenge our perceptions of their traditional structure. Thereby learning their language and demonstrating it at the same time through a confidence in experimentation. Each of their visual systems have their own distinguishing alphabets rich in investigation. In light of this perhaps we can reconsider our own learnt dialogue in approaching these traditions.

Steve Bishop works with carefully selected found objects. Structure and balance together with a concern for contradiction are some of the aspects that characterize his practice. Through a process of rehabilitation and re-appropriation an elegance of form is rewritten. Bishop installs a visual purpose for these works, from obsolete consumer good to a re-energised structure within the gallery context.

Mauro Bonacina’s monumental painting demonstrates his confident and performative expression where the canvas merely acts as the surface for his ‘one liner’s’. A fiercely experimental practice rooted in constant questioning his work spans a variety of media comprising paint, sculptural installation, performance and film. Bonacina does not buy into universalism but rather establishes complex references to various discourses both intrinsic and foreign to the notion of art.

Oliver Rafferty breaks down the methodology with which to make a work. Appropriating an object, altering its characteristics and transferring it to a world apart from its original intent, away from normal archive of references. The temporality of each of the works is heightened by their placement, no longer of consumption or appropriation but of both a languid and defined statement. Rafferty consistently stretches avenues of exploration through altering the standard use of and for the manmade material.

Ed Saye forces paint to break down into pure abstraction, it being reduced drastically to a purist form of making. Not unlike the white noise of a television set the repetitive nature of the patterns he creates lulls one into a false sense of trust in constant form, until on closer inspection the structure dissolves logical preconceptions and the inconsistencies allow a new relationship to develop. Through a bare palette Saye exposes the trust placed in his painting tools and welcomes ‘error’.