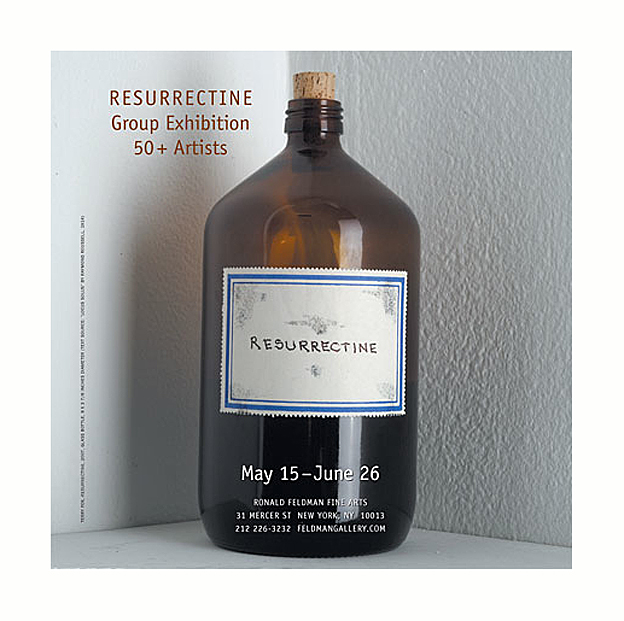 The Feldman Gallery will present Resurrectine, a large-scale group show of more than fifty artists.  The selection of artworks embraces the notion of transformation – the creative act of taking form, appearance, nature, character, or meaning, and making it new again.  The title of the exhibition is based on the name of the fictive elixir which restores life as imagined by Raymond Roussel in his 1914 novel Locus Solus and “rebottled” by the conceptual artist Terry Fox in 2007.

Resurrectine, the exhibition, is a guide to the always changing possibilities of language, signifying a rebirth and an expansion or narrowing of language, which in turn is linked to the visions of artists.  In the spirit of the fanciful conceit of Roussel’s potion, the theme introduces new ways of thinking and the power of creativity.

As a form of time travel, the artworks incorporate contradictions: a low budget home video reenacts Moby Dick; a Medieval painting of the Resurrection becomes a video game; a flash animation combines the looting of Iraq’s antiquities with 3-Card Monte; trees inhabit libraries and museums exhibit human taxidermies; a mirror transforms
the viewer’s reflection into that of Andy Warhol; doilies are stained with menstrual blood and Audubon prints are productively vandalized.  We are also engaged by the invention of nursing, fallen angels, a parent’s footsteps to a concentration camp, remembered spaces, the story of the Black film industry, escapes from death, Old Masters reborn, a Cheshire Cat, apocalypse management, a living electronic painting, reenacted famous protest
speeches, and dozens of other resurrectines.