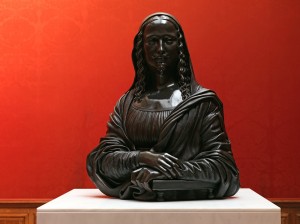 There will be a lecture on Subodh Gupta’s work by Dr Chaitanya Sambrani, who is a Senior Lecturer in Art Theory at the ANU School of Art, Australia on 1 October at 5pm.

Describing himself as ‘the idol thief’, Subodh Gupta is one of the most exciting and audacious contemporary artists to have emerged in recent years. The man dubbed by The Guardian as the ‘Sub-continental Marcel Duchamp’ will exhibit simultaneously at Hauser & Wirth’s Piccadilly and Old Bond Street galleries throughout October. Among the works he’s making specifically for this, his first major UK solo show is a three-dimensional reworking in bronze of Duchamp’s moustachioed Mona Lisa, L.H.O.O.Q, (1919). ‘Art language is the same all over the world’, he claims. ‘Which allows me to be anywhere.’

Many will know Gupta for his works incorporating everyday objects that are ubiquitous throughout India, such as the mass-produced steel tiffin boxes used by millions to carry their lunch, as well as thali pans, bicycles and milk pails. From such ordinary items the artist produces breathtaking sculptures that reflect on the economic transformation of his homeland while acknowledging the reach of contemporary art. For instance, Line of Control (2008) — a colossal mushroom cloud constructed entirely of pots and pans prominently displayed in the last Tate Triennial — created an overarching symbol through small and commonplace items. Through its fusion of global issues with local ingredients the work spoke across cultural boundaries, commenting on the deadly extremes nations go to in maintaining their borders.

In his new works Gupta moves away from composite sculptures towards objects that possess an auratic quality. Readymade commodities experience transformations in scale and material, transmogrifying from factory-produced items into extraordinary artefacts. Employing such culturally loaded mediums as bronze, steel and marble, he presents subject matters whose symbolism varies from the universal to the enigmatic, and whose emotional impact ranges from menace to nostalgia.

Appropriated icons from the canon of Western art share company with replicas of perishable, interchangeable goods associated with India, and items whose import is specific to the artist. Gupta’s work treats unlike things with equal respect, embodying the clash between impersonal and individual experience in contemporary society. He tests the ways in which meaning and value are constructed, exploring art’s capacity to withstand and channel the effects of expansion, displacement and translation.

Subodh Gupta was born in 1964 in Khagaul, Bihar, India. He studied at the College of Art, Patna (1983 – 1988) before moving to New Delhi where he currently lives and works. Trained as a painter, he went on to experiment with a variety of media, which culminated in his first installation in 1996 entitled ’29 Mornings’. His work has been prominent in major international biennials and has been the subject of numerous solo exhibitions across Asia, Europe and America. Recent group exhibitions include The Garage (GCCC Moscow)’s ‘A Certain State of the World?’, works from the Pinault Collection curated by Caroline Bourgeois; ‘Altermodern: Tate Triennial 09’, curated by Nicolas Bourriaud; ‘Indian Highway’ (2008), curated by Julia Peyton-Jones and Hans Ulrich Obrist, Serpentine Gallery, London, currently on show at Astrup Fearnley Museum of Modern Art, Oslo and touring to other venues; and ‘Where in the World’ (2008), curated by Kavita Singh, Shukla Sawant and Naman Ahuja, Devi Art Foundation, New Delhi.