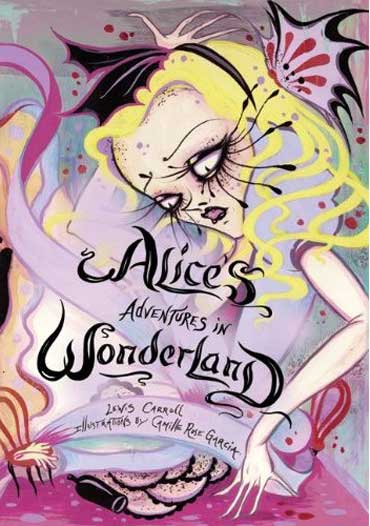 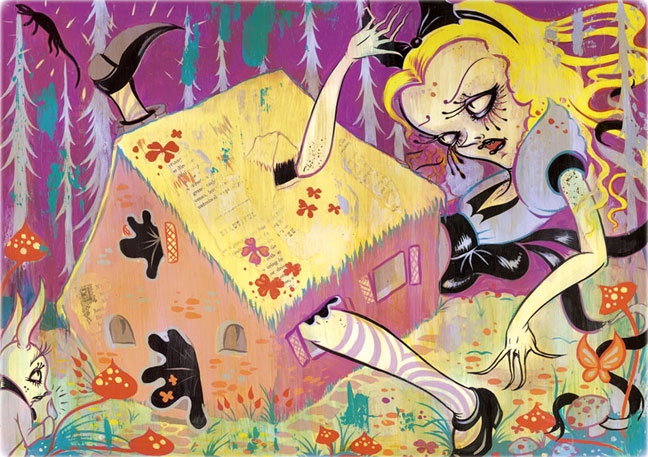 Merry Karnowsky Gallery is proud to present “Down The Rabbit Hole,” an
exhibition of new work by Camille Rose Garcia. The opening reception on
March 6th will celebrate the release of Harper Collins’ new edition of Alice’s
Adventures in Wonderland, illustrated by Camille Rose Garcia, as well as new
paintings inspired by the book.

In the original illustrations that will be on display, Garcia brings one of
literature’s most beloved characters to life in her trademark dark yet whimsical
style. Pairing watercolors with her usual bold acrylics, Garcia captures Lewis
Carroll’s dream-like fantasy world in a fresh and exciting visual reinterpretation
of the classic story.

The Disney-gone-wrong style that has earned Garcia international acclaim is
a natural fit for Carroll’s fantastical story. The vibrancy of her illustrations draws the viewer in and breathes
new life into the familiar narrative. For “Down The Rabbit Hole,” Garcia continues to explore Wonderland in
a distinctive exhibition of new artwork that picks up where the book leaves off.

Garcia grew up in the shadow of Disneyland in Orange County, and she received a Master of Fine Arts
degree from The University of California, Davis. A mid-career survey of her work was shown at the San Jose
Museum of Art in 2007.  Three other books of her work have been published, The Saddest Place on Earth,
2005, The Magic Bottle, 2006, and Tragic Kingdom, 2007.

Garcia’s work has been featured in Flaunt Magazine, Nylon, Paper Magazine, Modern Painters, Art
Prostitute, Juxtapoz, Hi-Fructose, LA Weekly and The Los Angeles Times. Her art has been exhibited in Spain,
Germany, France, and Italy, as well as numerous cities in the United States. She currently lives with her
husband in Northern California.

Garcia will be signing books at the party on March 6th, which will feature special musical guests, cupcakes,
and beverages provided by Bear Flag Wines and Honest Tea. Books and new limited edition giclées will be
available for purchase.