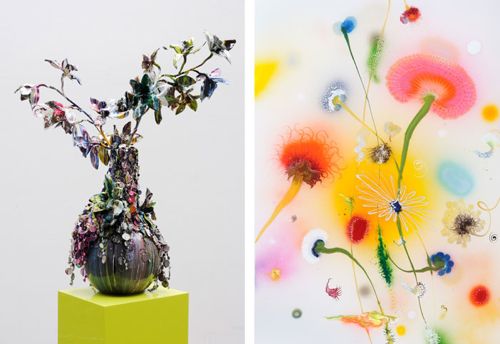 Christoffer Egelund Gallery is proud to present the solo exhibition “Beyond the Hurricane” by Austrian artist Thierry Feuz (b. 1968). The exhibition is the artist’s second solo show in the gallery and he displays new paintings, drawings and sculptures that present a different view to traditional depictions of flowers and nature. The exhibition “Beyond the Hurricane” opens up to a world of biomorph flowers floating weightless in indefinite monochrome spaces – to pure abstract striped multi-colored canvases, where everything recognizable is dissolved.

With poetic sensibility and a refined hand Thierry Feuz’ creates his paintings using a mix technique of acrylic and lacquer, which highlights and intensifies the colors and gives vibrant life to his semi abstract natural world. In technique as well as in motif Thierry Feuz’ works contain an immediate sensory and decorative appeal which, however, is contrasted by the underlying disruptive and catastrophic undertones as the title “Beyond the Hurricane’ indicates. Across the gleaming canvases swirling psychedelic flowers dance in spaces without gravity, as where they wrenched off of the earth by a tornado’s centrifugal dynamic force. In some works the flowers seem transformed into biomorph formations in the cosmos of celestial space or into microorganisms at the ocean floor. But among the works, the viewer will also find more “grounded” depictions of flowers, in the form of painterly close-ups of picturesque petals’ abstract and decorative patterns, but also pure abstract paintings consisting of multicolor stripes as cross sections of Thierry Feuz’ compressed color palette.

Nature and flowers also appear in Feuz’ sculptures, wherein dead and withered pieces of nature are revived with psychedelic spray colors and reincarnated as colorful ‘memento mori’ in Feuz’ universe between nature-figuration and abstraction.

Thierry Feuz was born in Vienna, Austria, in 1968. He graduated from Ecole Supérieure des Beaux-Arts in Geneva and Universität der Künste in Berlin in 1998 and later from the Haute Ecole d’Art et de Design in Geneva in 2003. Today he lives and works in Berlin and Geneva and he has numerous international solo and group exhibitions behind him, and several coming up. In 2010 alone, he presents four solo exhibitions in Austria, Schwitzerland, Denmark and in the United States, while also participating in group shows in Switzerland, Holland and in Canada. This year he is also represented at the following art fairs: “Viennafair”, Vienna, ”Art Dubai”, Dubai, “Art Karlsruhe”, Feldkirch and at “Palmbeach Contemporary”, Boca Raton. In addition he is represented in several major private and corporate international collections such as; Art Singapore Foundation, Singapore, Credit Suisse, Zurich, Musée d’Art et d’Histoire, Switzerland , Musée de la Communication, Bern, Saks Fifth Avenue Collection, New York and Fond Municipal d’Art Contemporain, Geneva.