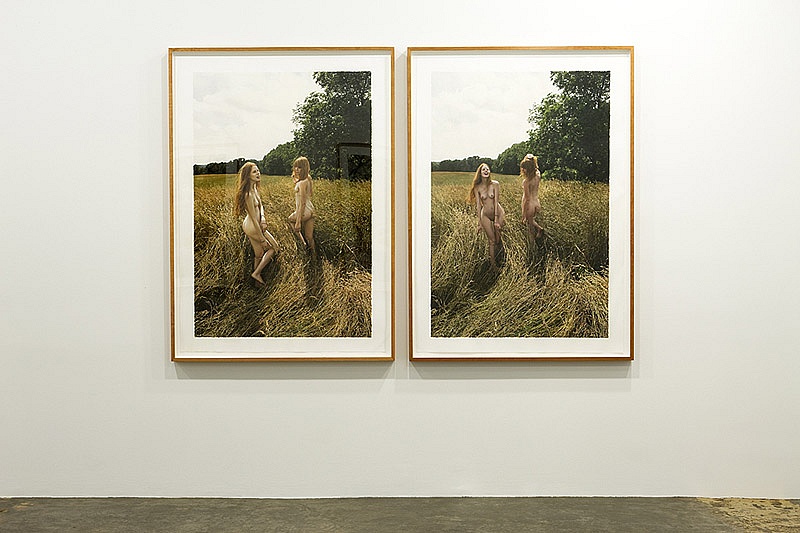 Mike Weiss Gallery presents Desire for Anima, an exhibition of new oil paintings on paper by Israeli artist Yigal Ozeri. His paintings of young women are unusual for their uncanny realism and psychologically engaging presence. This is achieved by Ozeri’s using both still photography and video in their initial stages, and painting the final works with thousands of tiny brushstrokes which animate the paintings’ surfaces.

This series of paintings explores portraits of young women, either standing together nude in dense grass fields, or posed alone, often wearing a pink diaphanous and lace gown. Many appear like film still, caught, unawares, unselfconsciously laughing, or moving through the lush backgrounds. Others gaze directly at the viewer in a somewhat challenging and unsettling manner. In some, all that is visible are fragments of the girls’ body – faces, limbs, richly textured garments. In every painting, Ozeri captures the vulnerability of the girl’s bodies, at the transitional age between youth and maturity. For the artist, the results of his paintings express his feminine “anima”, Carl Jung’s concept of the essential woman. This psychological presence is the hidden essence of his work.

Ozeri begins his process for these paintings by bringing a photographic crew to verdant landscapes in which he places the young women within the final composition in order to get precisely the results he is seeking. After choosing among the resulting images, he takes these and begins the painting process. The results are cinematic portraits of almost photographic realism. Their carefully staged, conceptual installations reflect the high-definition realism that today pervades media including television and movies; while their almost invisible brushstrokes, in the manner of traditional tromp l’oeil painting, play on concepts of perception and illusion.