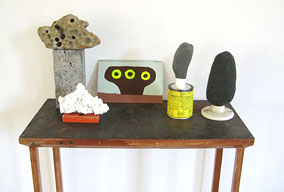 In his third solo exhibition at ZieherSmith, San Francisco based-artist Tucker Nichols presents sculpture, panels and works on paper created during a recent residency at the Headlands Center for the Arts in Sausalito, California. Recent projects include Temporary Storage Overflow Plan #3 in collaboration with Baer Ridgway in 2010 and interventions at the de Young Museum when he was artist in residence in 2008. His work will be included in the forthcoming California Biennial at the Orange County Museum of Art. ARTNews selected Nichols as an “artist to watch” in February 2010. Below is an excerpt from an interview with curator Dakin Hart; the entire text is reproduced in an artist’s book available in a limited edition at the gallery.

The work in your new show seems to suggest a kind of bricolage metropolis. You’ve lived in New York and other cities, but now you keep chickens, frequently abandon your studio to a flooding creek and spend lots of time walking in the hills. Is the grass always greener for artists, too?
I love New York, but as soon as I got to California I felt like I could breathe again. Breathing and making things go well together for me. That said I think about NYC often, and for this show I made a lot of the work from the perspective of someone who had heard a lot about New York, maybe from his uncle or from a pamphlet from the World’s Fair, but had never been. He assumed that people in New York would relate better to things that looked like where they live, so he kept trying to capture the city from what he had heard. You can try, but you’re a fool if you think you can really capture something so big and dynamic. Art is so much smaller than New York City.

You’ve been assembling objects—many poignant like the things we collected and kept as kids—for a long time, but you’ve only fairly recently started showing them. Is it hard to let those go, even when you feel like you’ve made a good piece?
The successful sculptures are hard to let go—it’s partly how I know they’re ready. I really didn’t want to be a sculptor. It seemed like such a pain to deal with all the things you end up making, adding more stuff to the world. Drawings pack away so neatly. But I can’t help myself; if I’m interested in our relationship to things, I have to work with things. A lot of the work in this show I made from things I’d like to keep but am secretly hoping I won’t have to ever see again. I’m conflicted about loving things and wishing they’d all go away, and making sculpture is somehow a good way for me to think about all that. Without that it’s just getting rid of stuff and as you know that’s just a relief.

At ZieherSmith you are showing works you made in a sun-dappled studio with window sills, bumbling bees, peeling paint, absolute silence and green stuff outside. In New York, are they going to be fish out of water; frogs crossing a road between culverts; or happy as clams?
Well as of this interview I’m not there yet to see it. But this work was made and chosen to be shown in New York, so it’s where it’s all supposed to go. I’m as curious as anyone how it will translate, but if it looks wrong that might be even better. You can’t make things in one place and have them look just right someplace else. It doesn’t make any sense. I like my things to feel a bit out of place, a bit lost in the shuffle. This show is like a giant postcard to the city. It looked good from this end.