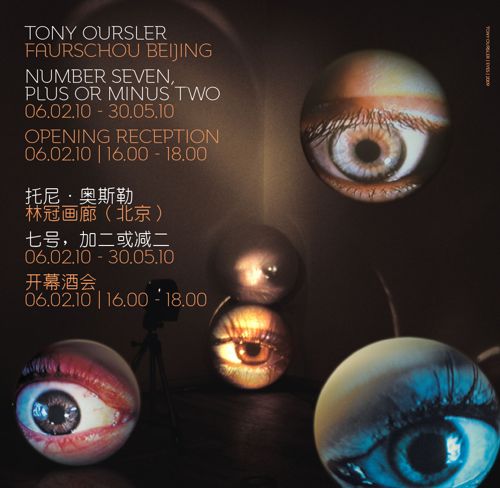 Experimental video artist
It is with great pleasure that Faurschou Beijing presents a solo exhibition by the American video artist Tony Oursler, his first exhibition in China.
Since the mid-1970s Oursler has been a pioneer in New Media Art, and today he is one of the very biggest, most experimental and innovative artists working in the field of the video medium. The exhibition will introduce the Chinese public to a survey of projected pieces from the early 90s to the present that will give a strong impression of this great artist’s work.

Unique idiom
Tony Oursler has become well known for his unique video and installation works, which combine spoken text, performance, moving images and sculptural objects. Unlike other video artists Oursler does not only project his works on a uniform surface but projects his video images on to dolls, balls, architecture and other surfaces such as treetops and clouds of steam. It has been said that the artist has freed the video image from the “box.”

The Human Head
In this survey of works from the past two decades the curatorial focus is on the head of the human body. All the works in the show are based on the head and the notion of the head as the permeable center of consciousness. The work addresses the ebb and flow of elements such as light, smoke, thoughts, impulses, language, voice, memory, which interact with this central icon.

The Works
The viewer is greeted by “Doll”, one of Oursler’s first breakthrough projections on rag dolls from the early 90s. The classic figurative sculpture is fused with a projected face, forming a hybrid between art and cinema. The little talking figure tests the viewer’s empathy by challenging his passive role in art viewing.

Entering the exhibition one has to pass through “Cigarettes” a series of oversized, tubular screens with high-definition projection. The effect is that of a smoldering, virtual forest of various Western brands of cigarettes. The viewer’s decision to indulge, or not, in various compulsive activities is called into question. This work also has further philosophical ramifications, including the pros and cons of progress as the columns seem to transform into architecture, or an industrial skyline.

In another installation, “Eyes”, large blinking eyeballs are floating like independent planets in the universe. With its point of departure in the history of the camera obscura, first mentioned by the Chinese poet and scientist Shen Kuo (1031-1095), this installation points to the eye as an anatomical analogue of our desire for escapism through technology.

Continuing the exploration of technology, media and the viewer’s fantasy, the installation “FX” (the abbreviation for special effects in the movie industry) is a multi-projection of a human head lost in a blaze of flames and explosions. Inspired by blockbuster cinema and terrorist activities, the work begins with an ironic, humorous premise: What would happen if the explosion was extended in time? In this installation something that would take place in a fraction of a second is stretched out in time, and the viewer can enter into a dialogue with an inferno.

Ending the exhibition on a humorous note, Oursler meets the viewer’s basic need for companionship with “Classic”. A head pieced together as a film collage of eyes and a mouth is uttering absurd sentences and statements. It is very amusing and disturbing too – and points to the way we mould technology to our desires, in the tradition of the “smiley face” and the “avatar” – the 3D representation of the interaction between human and machine.

The Magical Number Seven, Plus or Minus Two
The exhibition takes its title from George Miller’s classic 1956 paper “The Magical Number Seven, Plus or Minus Two” – an essay about the limits on the capacity of human cognition. Psychological experiments have shown that people have a hard time remembering more than about seven unrelated pieces of really dull data all at once. The point of Miller’s research is that for human beings to remember large quantities of information they have to associate memory fragments with the various data.

Technology and Humanity
Tony Oursler’s video installations are influenced by exactly this: his interest in our information and media society and its effect on mankind. The uncertainty that many people feel in connection with the constantly growing flow of information, the fragmentation of the world and alienation from our own bodies and society is a conspicuous theme in many of his works.

Oursler is fascinated by the enormous potential of new technologies, especially those which, like video and film, can get close to reality. Oursler uses technology to imitate human and emotional features – and by associating speech, moving images and objects Oursler creates video sculptures and installations that exhibit a humanity that can easily engage us.

This visually convincing and humorous way of approaching current important social, psychological and existential subjects has made Tony Oursler one of the most important artists in the world today.