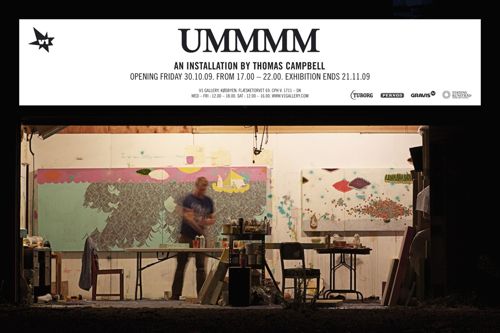 A solo exhibition by THOMAS CAMPBELL

In his own humble words Thomas Campbell (born 1969) merely creates “stuff”. But at the same time he is a prominent and necessary catalyst in one of the most interesting contemporary art movements in America. A movement where artists, filmmakers, photographers and musicians joined forces and created a new art scene and redefining the term “folk art”. A scene that involves creators like Bonnie “Prince” Billy,Tommy Guerrero, Margaret Kilgallen, Chris Johanson, Ed Templeton, Barry McGee, Aaron Rose and many others. And a scene that got the accidental title Beautiful Losers based on a book and exhibition curated by Aaron Rose and Christian Strike in 2004.

Thomas Campbell’s artistic universe is filled with soft curves, subtle tones, quirky poetic quotations and strange characters. A friendly melancholy and a loving gratefulness are embedded in each work. But don’t let it fool you. Underneath the calm surface an undercurrent of opposition and rebellion roams. An uneasy ocean of text fragments, aggressive abstract patterns and strange mixed material compositions. His strokes could go either way – along or against the fur. Like a welcoming high five, that could potentially turn it to a well-deserved slap in the face.

In Campbell’s works nature is a force. Clouds drift in the horizon and waves break in the mind. And in this landscape hooded characters are contemplating their tentative position. Their hesitant ‘Ummm’ holds as much power as expressive screams and sullen silence. And the middle of the road could just as easily be perceived as a strong median balancing oscillations as a dumb safe bet. Campbell’s works differ in both form and material. Sometimes his needle and thread roughs it up in organic patchworks. And in other larger works the material transitions are almost seamless dissolving the notion of ‘inside’ and ‘outside’. Campbell’s tableaus exist in a space beyond time and place with strange doppelgangers that are sometimes in focus and at other times just parts of a larger mosaic of waves, trees, soil, wind, snowflakes, patterns and paint drips. The heavy bronze underlines the warmth of the wood, the delicacy of the brushstroke and the vulnerability of the cloth. Small works float alone and are at the same time an important element in a more or less confined total installation.

Campbell’s surf films are pure poetic, and almost abstract. Even though the subject matter is more concrete, the films are reflections of the same themes that Campbell’s other works seem to revolve around. At one moment the surfer is at one with nature, riding the wave, the next, he/she is propelled into a maelstrom. The curiosity leads into adventure and out of control. Sublime mastery and complete submission intertwined. And the surfboard is the constant that balances and levels. Campbell’s other films, such as his skate film, connect to this theme and also work as a portrait of a lifestyle. Whereas his other art films are more abstract and obscure, exploring language, expression and emotion.

Underneath or above the movements and the images Campbell has produced a soundtrack freed of genre notions. His record label Galaxia is home to a diverse gang of artists like Tommy Guerrero, Bonnie “Prince” Billy, Ray Barbee and the Matsson 2, Mumlers and Peggy Honeywell. While these artists explore different parts of the musical galaxy they have all cast their anchor into the same mentality forming the base of Thomas Campbell’s diverse art: a gratefulness for freedom and the courage to leave the straight road and the GPS behind.

Thomas Campbell lives and works just outside Santa Cruz, USA, in a place that can’t be found on Google maps. He has been pivotal to the creation of a new art movement know for now as the Beautiful Losers. Campbell has exhibited worldwide. In 1999 he finished his first feature film “The Seeding”, in 2004 his second film “Sprout” came out and this summer his third feature film “The Present” premiered in the States. In conjunction with his exhibition at V1 Gallery The GRAND movie theater will host the Scandinavian premier of  “The Present” on Wednesday 28.10. After the premier Mattson 2 and Ray Barbee, two of the artists on Galaxia will play concerts at the jazz club La Fontaine.