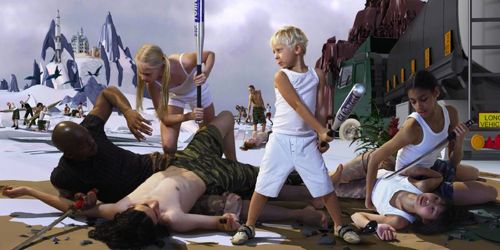 The current economic crisis, its consequences and the mediation for the salvation of capitalism is giving a “fake feeling that capitalism has failed and that it will be replaced by a new social form more concerned with justice.” Behind this false hope, capitalism is just changing its face, masking its exploitative nature and inventing new forms of oppression, updating itself for the 21st century. This is the point of departure of the show that brings together disparate art practices by artists in different media who thematize the short-circuiting flow of capital. To organize this show in the site of a commercial gallery is to emphasize the importance of the status of politics of aesthetics today. The question can be raised as following: is art capable to intercept this closed circle or not? The idea is not to simply chart the rise and fall of excess culture but to address the modes of production in late capitalism in relation to artistic production and consumption that  brings to the series of busts and booms in the art markets.

Acknowledging radical critical thinking today that researches and addresses the contemporary role of capital in (de)regulating all social processes, this exhibition has a goal to provide a (partial) insight into critical interventions in the structure of contemporary capitalist societies, aiming at shedding light to commodification of art. Art in this show does not only depict excess but points to paths away from the spectacular to the realm of “slight offense,” or “minimal radicality.”  This is where, at the beginning of a new decade, the place of subversion lies.

9 thoughts on “The Rise and Fall of Excess Culture”