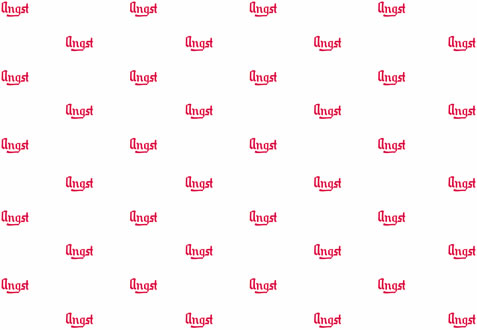 HAAS & FISCHER will inaugurate its new premises at Heinrichstrasse 219 with the group exhibition, THE LIVING ROOM. Working in collaboration with their artists, the gallery is transformed into a cosy, homey parlor complete with all the furnishings.

Upon entering the Living Room, the visitor is immersed into the intimate core of the gallery, namely its artistic program. The artists’ diverse interpretations of what constitutes a contemporary interior raise broader questions about self-conception and understanding of contemporary culture and our values.

US artist Joshua Callaghan furnishes the gallery with wallpaper imprinted with the emblem of the butcher, Angst. Callaghan juxtaposes the obvious play on words – a butcher taking as its name the German word for FEAR – with the gothic style lettering used for the company’s logo typically associated with the comforting Home Sweet Home cross-stitched panels prevalent in the typical American living room. The connotations here however, taking on quite a different meaning.

Katherine Newbegin’s photos of interiors render a double contribution to the living room theme. The two-dimensional images serve as decorative wall adornments within the gallery, while simultaneously depicting interiors themselves. Contrary to the gallery’s living room, however, Newbegin abstains from the use of staged scenes in her photography.

The painterly depiction of interiors has prevailed in art history since the 14th century, reaching its climax in Dutch painting in the 17th century. Images of 18th century interiors are viewed as a deeply middle-class genre symbolizing both private and privileged space. The traditional two-dimensional handling of interior spaces, also as practiced by Newbegin, takes on a third dimension through its presentation in the gallery.

Much to the contrary, the works by the Dutch portrait photographer Adriaan van der Ploeg desert their traditional place on the wall. The images of young backpackers aimlessly traveling en masse in Thailand are integrated into the show in such a way that they could easily be mistaken for family photos of grandchildren traveling abroad. The photos, with the atypical positioning within the gallery, take on the role of common parlor memorabilia.