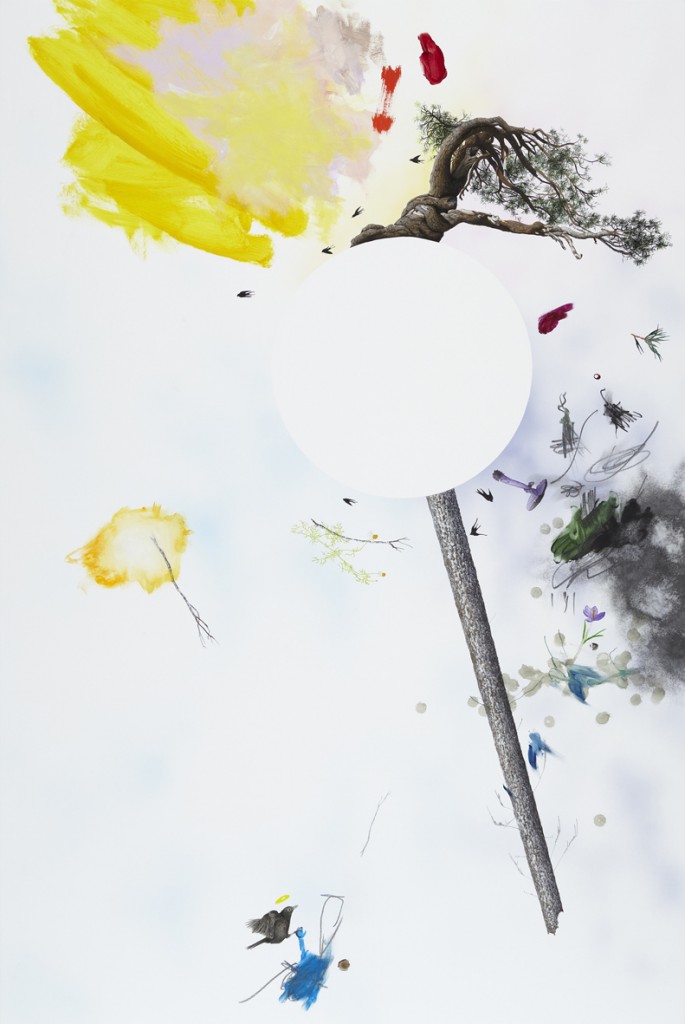 The Agency is pleased to present new paintings and sculptures by Danish artist Benny Droscher. The new paintings are a continuation of his past dalliances with abstraction and surrealism. The works juxtapose surface and depth, the graphic and the authentic mark all within zero gravity space. Weightlessness is an important issue for the sculptor turned painter Droscher. His sculptures have the appearance of solidity when in fact they turn out to be props, holes within cloth or grooves in foam. Droscher’s canvases are physically heavier than his sculptures, yet the chromatics and arrangement of the motifs are all intended to suggest weightlessness, floating and chaos. This suggestion works despite the fact that the paintings are arranged according to the classical laws of central perspective. On first glance Droscher’s works are of ageless beauty, on second glance they become harder to read. They are composites of ciphers, part Twombly, part pastoral quotation and symbols, which possibly resonate zen practice. It is beside the point whether any of the symbols can be read how they might have been intended, as they are presented at the point of dissolution. Rather than this being a Negative, in Droscher’s work it is a Positive, the point of separation from meaning is about the liberation or the drawing of breath from being literal, literary or pictorial. The centre of the work is usually a void, which might be read as a point of transparency or a portal.
One could argue that Droscher’s paintings are inverse, rather than emanating light to the outside they suck light from within, making them radiate in turn. In order to quantify this radiation the occasional mark or squiggle functions both as a reminder of representation but also as a blockage or smear which directs the gaze.
Modernist abstraction, even expressionism would have had to decide between gravity or weightlessness, whereas todays’ abstraction can be figurative, void, decentralised and physically bound by gravity all at once. The shift in perception could be blamed on the advent of anime and 3d computergraphics or games culture. It appears that Droscher’s paintings are about an abstraction of the gaze in the age of digital representation. It allows them to propose an innocence, which is also informed by the knowledge of parallel worlds (within quantum physics) and constant paradigm shifts. Droscher’s works, be it paintings, sculptures or installations pose questions rather than provide answers, but contrary to his titles, they are not philosophical propositions but about physics versus the poetry of perception.

Benny Droscher lives and works in Denmark. He has shown extensively internationally. After his solo exhibtion at the Bergen Kunsthall, Norway last year he participated in three shows in Italy this year alone, at Blindarte Contemporanea and Mostra D’Oltremare both in Naples and the Palazzo Venezia, Rome, as well as being included  in “The force of the Romanticism”, Malmö Konstmuseum, Sweden. He was profiled by Martin Herbert for the September Issue of Modern Painters 2007 as well as being commisioned to do the Manifesto for Art Review July/August 2007 and Arte Critica August 2008.