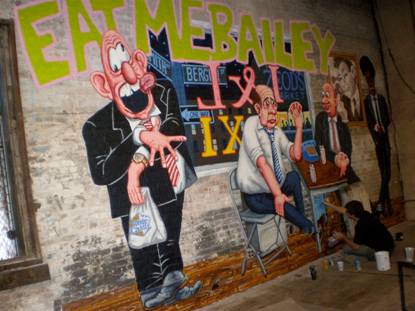 BROOKLYN, SEPTEMBER 28, 2009 — The Invisible Dog, a former belt factory in the Cobble Hill section of Brooklyn and the much loved home of the novelty gag of the 70s, the “INVISIBLE DOG,” will re-open on October 3 with an exhibition organized by NO LONGER EMPTY. NLE is a not for profit whose mission is to revive the numerous vacated storefronts and empty spaces throughout New York City. Many of the works presented in the exhibition reflect both the history of the space and the oxymoronic construct of the Invisible Dog:  a fantasy, a legend, something born out of nothing.  Artists have also been given the opportunity to work with the many trimmings, reels of fabric, leather and other materials left behind at the factory at the request of director, Lucien Zayan, who understood their future artistic value.

One of the featured artists, Tom Sanford, has created a site-specific (both location and subject matter) mural for the exhibition, called “L&L Taxi (Motherless Brooklyn)” based on Jonathan Lethem’s novel “Motherless Brooklyn” (1999). Sanford chose this subject matter because the Invisible Dog is located on the same block as the fictional L&L taxi / detective agency in Lethem’s novel (Bergen & Smith). The 12 x 22 ft mural imagines L&L in the present day, ten years after the story ends in the novel, with characters Lionel Essrog, Gilbert Coney, Loomis & Danny Fantl (left to right in the painting) still on Bergen street operating the L&L taxi service (no longer a detective agency) with a portrait of the departed Frank Minna on the wall in remembrance. The mural celebrates the history (albeit fictional) of Smith & Bergen, and honors one of Brooklyn’s many important contemporary authors.

Sanford claims that he “also decided to make the mural because I understand that actor Edward Norton in producing a film adaptation of “Motherless Brooklyn”. Norton will play Lionel Essrog, the orphan detective with a poetic case of Tourette syndrome from whose prospective Motherless Brooklyn is written. While Norton is a fine actor, he is nothing like how I imagine Lionel, and I thought I would take this opportunity to put my two cents in with regards to making the visual version of the characters of the book. A sort of one man insurgence against the Hollywood, the dominant force of visual imagination in our culture.”

NO LONGER EMPTY was conceived as a meeting point between art and the economic crisis.  The organization seeks to provide a challenging platform to artists whose opportunities have been similarly curtailed by the economic ravages and to revitalize empty commercial spaces by creating more traffic, showing the sites filled with positive energy instead of bordered up shells. The organization also hopes to encourage the local business community of each area through the increased flow of visitors that these exhibitions will bring. A supporting program of events has been planned that will include band nights and performances.