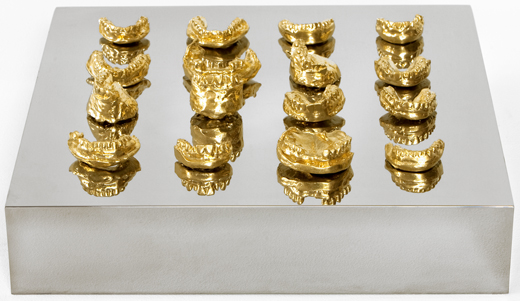 For this showcase Bojanov created ten new works that explore the idea of fragility, decay, and mortality through a medium of industrialized objects, handcrafted metals, and other materials that embody permanence: bronze, brass, stainless steel, glass, marble, and gold.

In What is On The Dinner Menu James Lee Byars? Bojanov presents three menacing gold-plated objects: a bone mallet, a bone saw and a vaginal speculum, placed in red-chromed platters that sit on a stainless steel table. What Teeth are You Wearing Mr. James Lee Byars? shows sixteen gilded casts of decaying human teeth displayed on a mirrored pedestal.

For Fear of Falling and Fear Of Drowning, Bojanov incorporates unlikely elements: a hand-polished Harley Davidson engine and a taxidermist’s coyote are joined to iconic symbols of minimalism such as mirrored cubes.

In this exhibition Bojanov expands on his previous works, more specifically his long-standing fascination of pivotal 20th century artists James Lee Byars, Yves Klein, Constantin Brancusi, and Marcel Duchamp. However, he does not attempt to reproduce nor quote these artists. Rather, because they have melded with Bojanov’s subconscious of artistic thought, they have become a part of the fictional narrative of the show.

Bojanov was born in 1968 in Bulgaria, and currently lives and works in New York. His work has been exhibited at various international institutions that include Haunch of Venison in Zurich, the Shanghai Contemporary in China, and Eli Bank Gallery in Bulgaria, in addition to the Art Today Association Center for Contemporary Art in Plovdiv, Bulgaria. Bojanov is also an accomplished filmmaker with his 2001directorial debut in the short film, Lemon is Lemon.  His films have received numerous awards and have been screened in over 40 international film festivals.  He is currently working with Shilo Films on his first feature film, Avé.