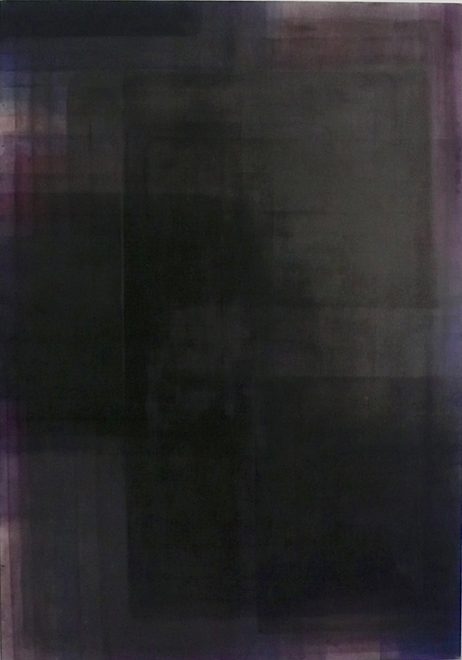 Kavi Gupta is proud to announce the opening of his new gallery in Berlin featuring a two person exhibition of new works from gallery artist Jason Loebs and Berlin-based painter James Krone.

Jason Loebs’ works are studies in historiography and the shape of time. Drawing from images throughout art history as well as the artist’s own developed formal processes, the work describes how the present is comprised of a fragmented and reconfigured past to show how the artist wavers between being the determined object of history and the autonomous agent capable of constituting the new. Five of Loebs’ grey and cracked “Untitled” paintings will be on view.

James Krone’s paintings are geometric abstractions built through an impressive palette of violet, crimson and black washes. Casual about their rigor they demonstrate the grand effect of making little effort. For an artist whose other bodies of work include collages of himself and Jim Morrison and ashtrays made from long birch branches, it is a painting practice that speaks of a hollow world and solipsistic living.

Jason Loebs (b. 1981 in Hillside, New Jersey) lives and works in New York City. His work has previously been exhibited at Loop Raum für Aktueller Kunst in Berlin, Voxpopuli in Philadelphia, and Harris Lieberman Gallery in New York City. Loebs received his MFA from The School of The Art Institute of Chicago in 2007.

James Krone (b. 1975 in Chicago) lives and works in Berlin. His work has previously been exhibited at venues in Europe and America including Circus Gallery in Los Angeles, Gallery Gerersdorfer in Vienna, and Schalter in Berlin. He received his BFA from the The School of The Art Institute of Chicago in 1998.