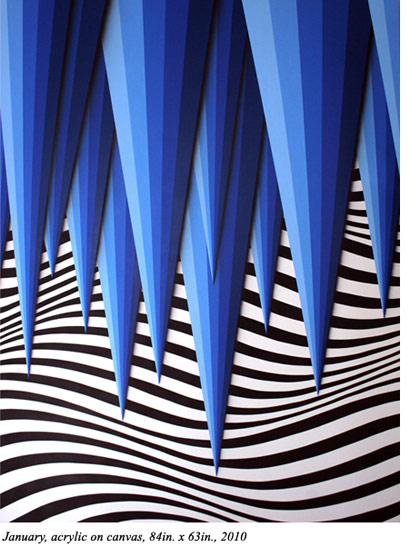 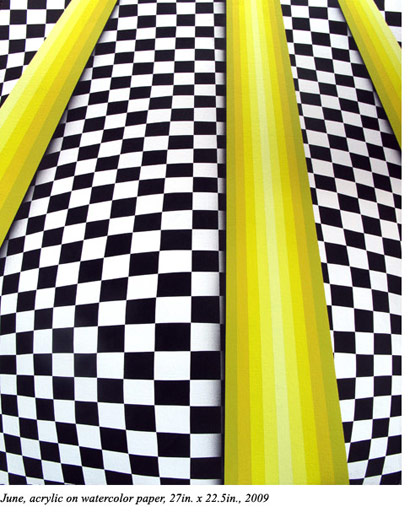 A highly-regarded explorer of visual communication, Aldous Huxley once said, “The man who comes back through the Door in the Wall will never quite be the same as the man who went out.” The same can be said about a few particular months of teenage life experienced by artist Tofer Chin, depicted, from memory, in his new body of work, showing at the Fecal Face Gallery in San Francisco.

Entitled “Alex,” Chin’s new show further represents his on-going relationship with Op-Art, as well as his perseveration on sensory perception and mind expansion, while also impressively marking his move to wholly personalize and reinvigorate the movement. Whereas previous works used unnatural color and concept to examine the spiritual and psychological impact of synthetic LSD, “Alex” strives to enhance the personal and shift to the organic by refocusing on the naturally-derived hallucinogen, mescaline. Unlike LSD, mescaline never lies. Instead, the mescaline experience includes visual enhancements of originating truths.

Identical to the intricate components frozen in each of Chin’s new works, these fleeting enhancements come in the form of recurring visual patterns such as stripes, checkerboards, angular spikes and other very simple fractals which can and ultimately do turn very complex. This, en total, surmises the intended shape of Chin’s current exploration.

“Alex,” Chin’s most personal showing to date, represents a finite period, a series of particular months, connected by a hard line of earth tones, deliberately involved, only to be exhilerated through the mescaline eyes upon which they reflect. Catch a glimpse from the confines of your controlled mind as trip excerpts pause on the gallery walls. Bare witness, assuredly safe, as Chin completed the actual experience evoked, long, long ago.

Chin’s showing at the Fecal Face Gallery also marks the release of his new limited-edition acid print. Entitled “No. 1.2.” This signed and numbered print will be available through the gallery.
About Tofer Chin
Tofer Chin, a Los Angeles native, continues to exhibit, in both gallery and museum, in Los Angeles, New York, San Francisco, Barcelona, Sao Paulo and Australia. Past works appear in The Los Angeles Times, Flaunt, Nylon, Theme, Trace, Big, Vice and Rojo. In 2006, Rojo published his first book of photography, entitled ‘Finger Bang’, and in 2008, published his highly anticipated follow-up, entitled ‘Vacation Standards’. In 2009, Chin participated in ROJO – OUT Urban Stage Sao Paulo where he was selected to create a permanent site specific painting on three massive concrete structures in the center of Sao Paulo, Brazil. 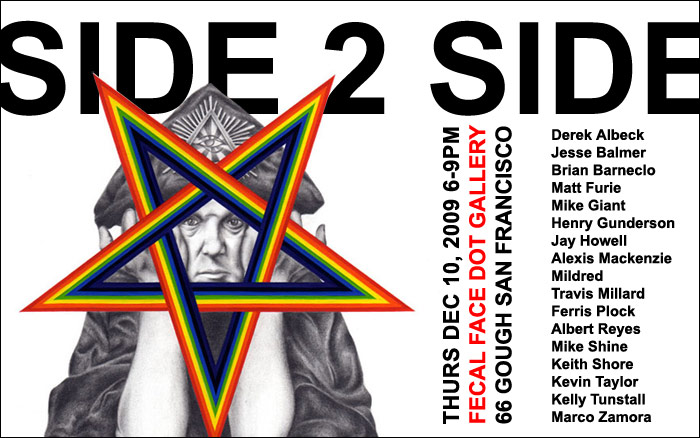