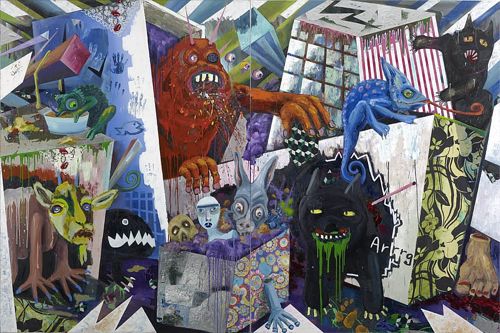 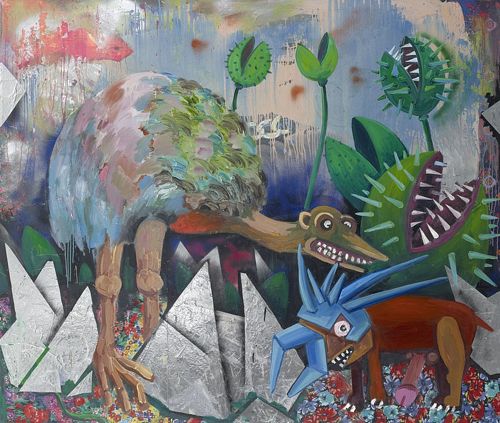 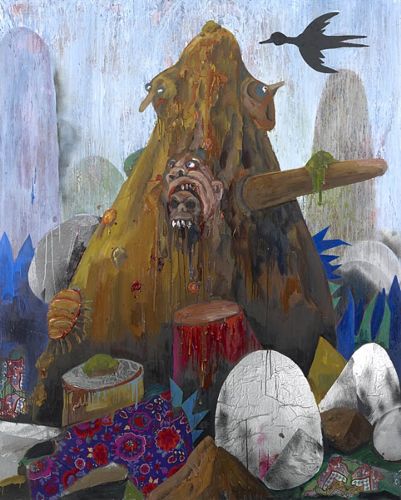 Mike Weiss Gallery presents Kopftheater, a new exhibition of paintings by Berlin based artist Stefanie Gutheil. This is the artist’s first exhibition in New York and at Mike Weiss Gallery. Stefanie’s bold, multi-dimensional paintings are tactile depictions of her own life. The patterns of unexpected fabrics and aluminum foil adhere to the oils, acrylics and spray paint applied to the surface and come together to form scenes from the artist’s excessive imagination, both playful and grotesque. Her paintings provide the cast and set for her own kopf theater, or theatre of the mind.

Born and raised in a small conservative town in southwest Germany, Stefanie moved to Berlin ten years ago and since that time has witnessed the growth of Berlin’s contemporary art scene; an international mish-mash of artists converging on the city after the fall of the Berlin Wall. Her monsters and creatures, both miniature and giant, are gross caricatures of the people in her daily life; artists, musicians, dancers, poets and revelers in the city of Berlin. Tucked into the center of the city’s nightlife pocket, the scene around the artist’s studio provides the visual fodder for what becomes her larger than life imagery.

Influences from the chaotic and cramped compositions of Bosch and Brueghel are evident. In Berg I and Berg II, a massive heap of excrement and bodies rises up from the marred landscape of skulls and stumps; pyramid shaped in subtle homage to Brueghel’s The Tower of Babel. Mostly dirt colored in appearance; the landscapes are punctuated by flecks of silvery aluminum foil and hints of glitter and cheeky floral fabrics. In Kopftheater, for which the exhibition is titled, a Boschian landscape of monsters and gnarled animals peek and crawl out of the angular cave-like structures, one losing its eye in a cinematic projectile thrust from its socket.

The applications of materials to the canvas denote object and action. Sticky, dripped acrylic froths from the mouths of radioactive dogs; globs of oil, shot like bullets at the canvas, spew vomit from the mouths of behemoth monsters; stark geometric, bright floral or swirling blue textiles glued flat and then painted on top of indicate plant life, sea and sky or rooted structure. The diverse stylistic processes used on each painting’s surface bond the chaos within the imagery. Through their variety, they are united, much like the characters in Stefanie’s own life that inspired these scenes.

Stefanie Gutheil lives and works in Berlin, Germany. The artist received her Masters of Art and Bachelors of Art at the Universität der Künste, Berlin.  She has exhibited previously throughout Germany and Europe and this is her first exhibition in New York.