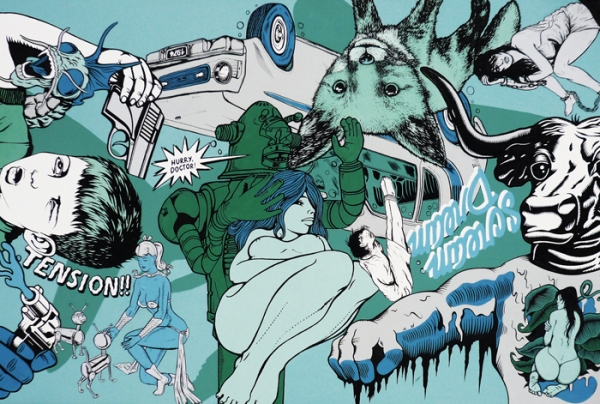 Antistrot’s new body of works showcases its maturation as a group of six artists working closer than ever before. This depth is reflected in finer line work and fewer text balloons within the paintings. Antistrot has coined the term “docudrama” to describe their inspiration for this exhibition. Docudrama is a collection of material from media, comics, fashion mags, porn mags, old film books, 1970s war books, and even from the conversations taking place while the artists work. This docudrama is then taken out of context and placed on a canvas with several other images in a spontaneous, unplanned composition. The resulting conglomerate may convey the central character’s scream of emotions or even a nightmarish landscape.

Antistrot takes a unique approach to collaborative art. Instead of taking turns, the artists sit around a table and paint one canvas simultaneously. These paintings are executed using Indian ink for bold outlines and fresco lithe for color. Antistrot never prepares a sketch for its pieces, leaving the composition and content to be discovered during the process of artmaking. In the same spirit of spontaneity, Antistrot will be executing a mural within the gallery to accompany its new works.