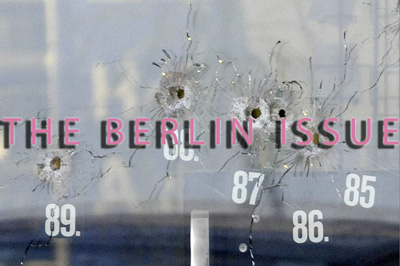 “Project spaces have a long tradition in Berlin.
Since 1993 I have experienced the restless changing process of Berlin’s cultural landscape.
Alongside the proliferation of commercial galleries in Berlin in the last five years, project spaces continue to be found throughout the city.
To me, this indicates that the city still has open desires. Open spaces and open desires.
Fortunately, the over-representation of the ”established order“ does not saturate the symbolic need and desire for experiencing art and theory as a common good, which opens up possibilities for new forms of sharing public and private space.
Berlin-based independent cultural workers, artists, curators and theoreticians seek to redistribute their cultural capital through the gesture of offering space to, and developing different formats for their colleagues and the public for the exchange and experience of art and theory processes.
Considering Berlin as a laboratory for cultural development for this online issue I launch Sharing the Potlatch, a discussion that will be continued in different formats about the role and reality of project spaces.
I invited following nine Berlin-based project spaces.“

One thought on “Recommendation”