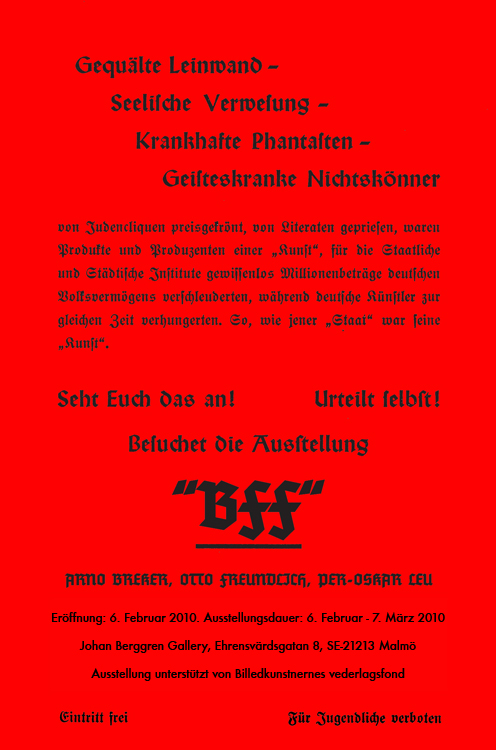 Johan Berggren Gallery is pleased to announce an exhibition by Norwegian artist Per-Oskar Leu (b.1980). The show is a straightforward synthesis of various elements, sentiments and strategies in Leu’s practice throughout the recent years. At the bottom, as always, there’s a rigorous research and archival process that has resulted in an expansion and recontextualisation of historical processes – questioning our conception of a number of actual historical events.

The exhibition BFF – Best Friends Forever – is an attempt to poke at the term ’Political Art’. Arno Breker and Otto Freundlich, two German artists of the early 20th century who stood on opposite sides of the political spectrum – Breker was Hitler’s favourite artist and Freundlich was an outspoken communist – form the basis for this project. They suffered very different fates but their life stories are both quite remarkable, and could be used as examples of ‘political artists’ who quite literally lived and died for their beliefs. Leu’s extensive research, points in the direction that Breker and Freundlich might have met already in Paris during the 1920’s. When looking back, the artists’ lives and struggles come to personify the ongoing cultural turmoil of war-time Europe as well as what happened to the understanding of art at the time. The BFF project, in many ways, reflect how the nazi system’s attack on modernism resulted in the marginalization of the classic-heraldic sculptural language and figurative art as such.

The current exhibition can best be understood as a curated one. It shows the artist intermingling and recreating historical material and artifacts. For the first time ever, original works by Breker and Freundlich will be shown together. A dialogue is created between the two characters using acquired works. But Leu also recreates, intervenes and creates new ones. A central work shows the resurrection of Freundlich’s lost sculpture ‘Der neue Mensch’ – the poster work of the ’Entartete Kunst’ show – and destroyed by the nazis. Using Rapid Prototyping Technology and recycling an original sculptural work by Breker, Leu thus conseals Breker’s and Freundlich’s possible friendship forever. Another work shows a film sequence shot in Paris where Leu has gotten hold of an SS uniform, identical to the one Breker wore in an infamous photo with Hitler in front of the Eiffel Tower. Staging a performance work at the exact same spot, the film plays on the fact that a large portion of both Freundlich’s and Breker’s works have been lost and touch upon the great sensitivity and strategies that we’re using to deal with this, still very loaded period of European history, as well as the changing role of the artist throughout the years 1933-45.