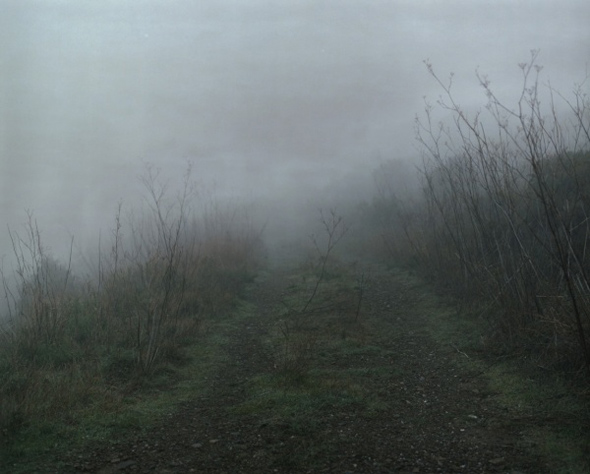 Evaders portrays the journey of a singular persona traversing the legendary “Lister Route”, a passage through the Pyrenees mountains across the French / Spanish border. The passage is surrounded by some of the most exquisitely beautiful and severe vistas accentuated with equally severe elemental conditions. The locals in the region refer to the relentless gusting winds as “Transmontana” and claim that it has the power to make travelers go mad.

The making of this film, as with much of Gersht’s work, was engaged as a kind of expeditionary journey, with unanticipated environmental phenomena influencing the medium and process. Gersht and his small crew retraced the path taken by the German-Jewish writer and philosopher Walter Benjamin during his escape from Nazi occupied France in 1940. The same route was also used by the Emergency Rescue Committee established by American journalist Varian Fry to rescue many intellectuals, artists and political dissidents that were fleeing the Nazis as well. Both in its harsh conditions and its tragic history, the route through the Pyrenees has come to symbolize a border between life and death itself, though with the creation of the European Union and its unified European market the idea of what a border is and the Lister Route has changed significantly; the once guarded checkpoints all but abandoned now.

Despite the many references to the final journey taken by Walter Benjamin, the film does not attempt to re-enact his journey or portray Benjamin in a strictly historical or literal sense, but is an open exploration of a primal struggle between a solitary individual and the elements. Thus the film is set in a nonspecific time, which could be thought of as no time or anytime.

Gersht states that the film is visually inspired by Paul Klee’s painting, ‘Angelus Novus’, that was referenced by Walter Benjamin in his final essay ‘Theses on the Philosophy of History’.

….”an angel looking as though he is about to move away from something he is fixedly contemplating. His eyes are staring, his mouth is open, his wings are spread. This is how one pictures the angel of history. His face turned toward the past. Where we perceive a chain of events, he sees one single catastrophe which keeps piling wreckage upon wreckage and hurls it in front of his feet. The angel would like to stay, awaken the dead, and make whole what has been smashed. But a storm is blowing from Paradise; it has got caught in his wings with such violence that the angel can no longer close them. This storm irresistibly propels him into the future to which his back is turned, while piles of debris before him grows skyward. This storm is what we call progress.”

This tragic image of an angel battling the elements, attempting to cross a border or, as suggested by Benjamin, to return to the past in a helpless desire to resurrect what has been smashed, is the core premise of the film.

The clear visual references to German Romanticism, particularly the paintings of Caspar David Friedrich, are suggestive of a fatal attachment to German culture that prevented Benjamin, like many others, from seeing all the way into the terrible truth of the Nazi project until it was too late to escape its consequences. In the film the traveler is hopelessly moving through the romantic landscape attempting to free himself from the physical and cultural burdens that are imbedded in this sublime environment; preventing him from reaching a new horizon.

The film is a dual channel work projected as two frames side by side. The two frames establish a dialogue defined by contrasting depictions of the traveler and his surroundings. The still photographic works in the exhibition are images taken by Gersht during his journey and document both elements seen within the film as well as some outside it. Many of these images are composited panoramas that Gersht created by combining multiple images together.