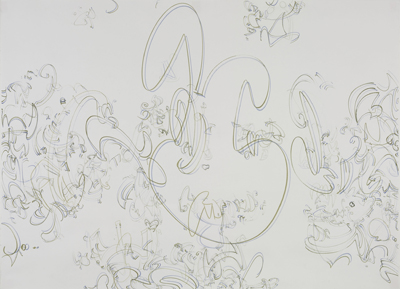 Taka Ishii Gallery is pleased to announce our exhibition with Nobuya Hoki. Born in 1966, a graduate from the Kyoto City University of Arts (MFA, painting), Hoki lives and works in Kyoto. He has been included in numerous international exhibitions including Roppongi Crossing: New Visions in Contemporary Japanese Art 2004, Mori Art Museum, Tokyo, and GARDEN OF PAINTING: Japanese Art of the 00s, The National Museum of Art, Osaka (2010). In April of this year, he is scheduled to exhibit at the Suntory Museum in Osaka as part of the exhibition, Resonance.

At first glance, Hoki Nobuya’s paintings appear to consist of little more than nondescript linear expressions. But even after a short gaze at his work, every viewer will realize that most of his lines are actually made up of two parallel lines. Hoki refers to this means of expression as “nihon-ga” (lit., “double painting”). …This was part of an audacious, yet (or so Hoki believed) still unrealized, attempt in the history of painting to completely eliminate the symbolic meaning inherent in an image while still depicting it. …Considering the remarkable results that Hoki’s bold approach has produced, his “nihon-ga” have led to the realization of a truly Japanese form of painting or Nihon-ga.
This is Hoki’s second solo exhibition following his 2008 show at the newly opened, Taka Ishii Gallery Kyoto space. In this forthcoming exhibition, he will be presenting oil-painted works on panels, alongside two series of drawings; a portrait which attempts to perceive a new “surface” for the human face, and what the artist himself refers to as “Ji-matagi” (lit., “Material (Color) Strides”), a “Nihon-ga” piece in which he constructs two lines –one more and one less luminous in contrast to the original color of the Material (paper).

By dividing one color into two complementary colors (for example, Black into Red and Blue) and allowing those lines to travel side by side in a subtle trajectory, Hoki creates a radical three-dimensional portrayal of depth, “a multi-stratifying of single layers” and seeks a new potential for painting which is free from a traditional approach.

One thought on “Nobuya Hoki”