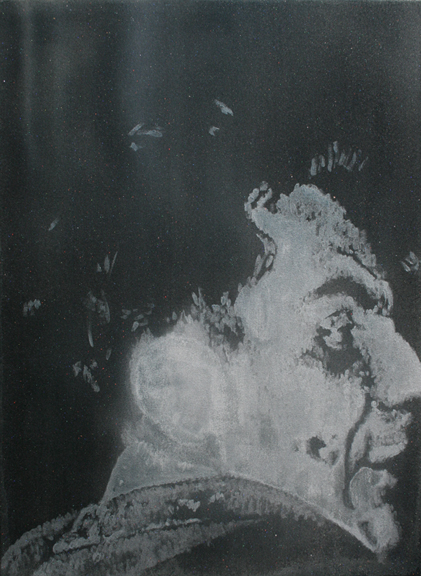 Novels are not about “teaching people how to live but about showing the
possibility of what it is like to be someone else.”  – Brian Finney

Michael Benevento is pleased to present the West-Coast solo exhibition of Los Angeles-based artist Miller Updegraff.
Based on a selection of images from the 1930s, the subjects of Updegraff’s eleven paintings on unprimed canvas speak
less to an objectivity linked to representation and instead prioritize an ethnographic ambiguity allowing for profound discourses of desire.

Reconceptualizing the gazing between a group of tribesmen and contemporaries – D.H. Lawrence, Humphrey Spender, and
Evelyn Waugh – Updegraff’s paintings engage the viewer in a visual exchange that is not ironic, wholly honorific or whimsical,
but rather opens up a discourse on what can happen when externalized photographs of a group who problematized binary sexualities
interface with a practice that questions notions of critical distance.

Using a subdued palette, the paintings evoke the nostalgia of the black and white photographs used as source references.
To read Updegraff’s paintings is not simply to identify with the subjects on the canvas, but instead to question the varied forms
of mediated representation with an understanding that stand-ins can be far more complex, if not enticing, than the “real” thing.

By exploring the strategies of power negotiations, however subtle, between men – either between subjects or in the artist’s relation to
the subjects – Updegraff abuts the implausibility of anthropologic “participant/observation” with Lacanian constructions of fantasy to produce
irresolvable responses to the enigmatic desire of the other.

Miller Updegraff earned his M.F.A. from California Institute of the Arts in 2008. A Georgia native, Updegraff lives and works in Los Angeles.