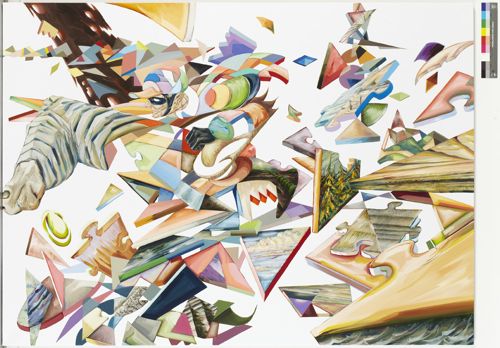 This exhibition consists of three large paintings hanging from the ceiling, slowly turning around, like mobiles. Although every painting is an independent work, new meanings occur when the three paintings are taken away from the traditional installation on the wall. The visual energies and the symbols evokes a “dance macabre” of meanings. The work becomes more intense for the viewer, as it slowly passes by. It requires a new way of looking at the works, and as it reveals the back of the canvas, with signature, title and stretchers, new peculiar dimensions are added to the old media that painting is.
The main inspiration for the show is the theories by Swiss philosopher Carl Jung on “synchronicity”, which is “the experience of two or more events that are causally unrelated, occurring together in a meaningful manner. To count as synchronicity, the events should be unlikely to occur together by chance”.
To the artist the exhibition is an investigation of vision and inspiration, and how the two phenomenon’s weaves in and out of each other in the artistic process.
Alongside the spinning paintings, three photographs are presented, each showing the motif that was the original inspiration for the painting. Or was it the other way around? When does a vision come alone and when is a vision an inspiration? When do we think we know what lies behind a work of art and when is it just a visual and symbolic coincidence?
Three videos are also presented, showing the artist dancing with each of the three paintings: Yet another example of how one genre of art can inspire another, these dancing videos also inspired the idea of letting the three large canvases spin.
Through the theories of Jung, the idea of a “SynchroniCity” has occured: A place, where, just for a moment, a city of dreams are built, without its inhabitants ever meeting each other, besides in a small glimpse.

Martin Bigum belongs to the part of the Copenhagen artscene, that has gained great international recognition through the 90s and 00s.
In the recent years MB have had soloshows at Air De Paris (FR), BFAS in Geneva (CH) and Wohnmaschine in Berlin (DE), and is represented in several international collections.
He is a well-established artist in Scandinavia, with representation in 16 museums and 9 museum solo exhibitions.
Martin Bigum ist bekannt für seine cartoonhaften Gemälde, ist aber auch als Fotograf, Video-künstler, Dichter und Schriftsteller aktiv. Im Alter von 15-22 war Martin Bigum Cartoon-Künstler für die dänische Ausgabe des amerikanischen Satire-Magazins MAD.
Easily transgressing one mode of expression to another, the artist deploys a form of complex allogegory to which there is no real equivalent on the contemporary art scene.

One thought on “Martin Bigum”