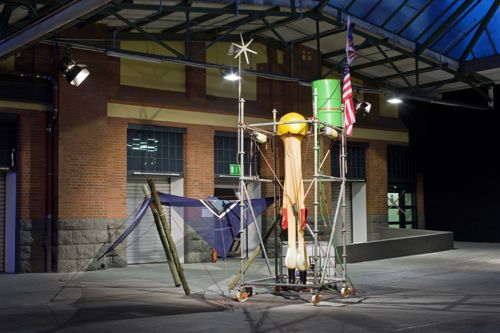 Galerie Nordenhake Stockholm presents an exhibition by the Slovenian artist Marjetica Potrč. Through her multi-disciplinary practice that merges art, architecture and social science Potrč’s work negotiates the challenges of global developments in the areas of town planning and architecture. Her work emphasizes self-reliance and individual empowerment, problem-solving tools and strategies for the future and testifies to the failures of some of the grand principles of Modernism. In the exhibition she shows a case-study structure and two series of works on paper.

Burning Man: Tensegrity Structure and Waterboy, is an architectural structure from the Burning Man Festival in the Black Rock Desert in Nevada. The festival is described as an experiment in community, radical self-expression, and radical self-reliance. The tensegrity structure is based on a design first developed by Buckminster Fuller and Kenneth Snelson in which its stability is result of the principal of the balance of push and pull. Here the shelter is upgraded with self-sustainable technologies such as a solar canopy and a wind turbine, which power the water pump that serves the Waterboy, a cooling bath respite in the desert heat, designed by Marque Cornblatt for the Burning Man Festival. By combining strategies for both leisure and subsistence, participants in Burning Man practice survival strategies through play.

The Homo Ludens (Latin for “Man the Player”) and Venice series of drawings are a result of recent on-site research. Both series address the problems and challenges of the tremendous changes to our living conditions due to global warming and the planet’s changing geology but also represent a celebration of self-sustainable practices and community building.

Homo Ludens explores the hypothesis that the Black Rock Desert will re-fill with water and become a lake again. Changing water levels require new architectures – perhaps of the type currently designed in a playful manner at the Burning Man Festival. In Venice the rising water level has a fundamental impact on the local communities and their living conditions. Both architectures proposed are self-sustainable, temporary and flexible catering to a more nomadic lifestyle.

Marjetica Potrc is an artist and architect based in Ljubljana, Slovenia. She is best known for her on-site projects using participatory design, her drawing series, and her architectural case studies. Her work has been featured in exhibitions throughout Europe and the Americas, including the São Paulo Biennial in Brazil (1996 and 2006) and the Venice Biennial (1993, 2003, and 2009); and she has had solo shows at the Guggenheim Museum in New York (2001); Max Protetch Gallery in New York (2002 and 2005); Galerie Nordenhake (2003, 2004 and 2007). Her many on-site installations include Dry Toilet (Caracas, 2003) and The Cook, the Farmer, His Wife and Their Neighbour (Stedelijk goes West, Amsterdam, 2009). She has taught at several well-known institutions in Europe and North America, including the MIT (2005) and IUAV Universita luav di Venezia (2008, 2010), and has published a number of essays on contemporary urban architecture. She is the recipient of numerous grants and awards, most notably the Hugo Boss Prize (2000) and the Vera List Center for Arts and Politics Fellowship at The New School in New York (2007). She is currently engaged in the on-site project Between the Waters: The Emscher Community Garden’ for “Emscher Kunst”, Essen, the European Cultural Capital, 2010.