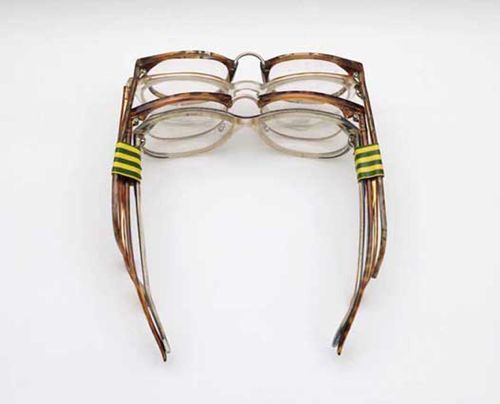 Marcus Coates is renowned for his shamanic performances, where a community or an individual is invited to ask difficult questions pertaining to their own predicament, from the deeply personal to the broadly political. Coates summons answers by communing with an animal kingdom that is part imagined, part scientifically observed. In costume and literally entranced, he relates the nature of this host of species and their attendant attributes; and from these narratives he extracts analogies, identifies thought patterns and discerns clues to a wider understanding.

For his first exhibition at the gallery, Coates has absented himself from the gallery, displaying only the material peripherals of these performances. We are presented with the questions asked and answers offered, as well as the costumes and objects used to facilitate the exchange, displayed like anthropological artefacts of a strangely familiar culture. The questions and answers are translated and transcribed during each performance, the handwriting indicating a sense of urgency behind each social, political or personal problem addressed. The objects have been collected, adapted and reused over years, bridging the utilitarian and the symbolic, the everyday and the mythical. Several pairs of glasses bound together become a mask and a mode of seeing beyond the immediate; lemon juice produces a soured, contorted face, which, in some shamanic traditions, increases the chance of admittance to the grotesque realm of the spirits.

Participants in these performances may or may not believe in Coates’s abilities as a transcendental shaman – the point is not so much the validity of his claims, but the discussion they elicit. With such pressing issues as anorexia and war on participants’ agendas, it can be the naïve outsider who asks the obvious, but useful, questions. And it is Coates’s recourse to the world of animals that demarcates an alternative space, enabling the demystification of social relations, imaginative speculation on causes and the dramatic resolution of enduring problems.