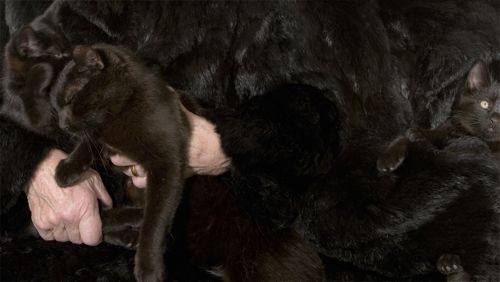 A particularly recognizable and recurring motif in Lisa Strömbeck’s art is animals – with the focus on cats and dogs, while more general thematic aspects are the feeling of loneliness, the relationship between humans and animals, and the quest for closeness and love through the existence of the pet.

The solo exhibition In Your Hands presents the staged photo series Uniform. Uniform shows various pets being cuddled by their fur-clad owner. The highly cropped composition of the photograph makes it almost impossible to know where the human being ends and the animal begins, since the fur is so like the animal’s in both colour and texture. The boundary between the intimate and the claustrophobic seems hard to detect, and this gives the works aspects of love and closeness versus brutality and tenderness. It is an old saying that a dog often looks like its owner, but in the series Uniform Strömbeck tries to show the viewer that the opposite can equally be the case.

Lisa Strömbeck graduated from the Royal Danish Academy of Fine Arts in 1999 and lives and works in Copenhagen and in Borrby, Sweden. Earlier in the year Strömbeck participated in the group exhibition Derrida’s Katze at Kunstraum Kreutzberg in Berlin with the series Uniform. Besides the solo exhibition at the Martin Asbæk Gallery the gallery will present some of the works from the series Uniform at the art fair Art Cologne on 21st – 25th April 2010 and later at VOLTA6 in Basel on 16th – 20th June 2010.