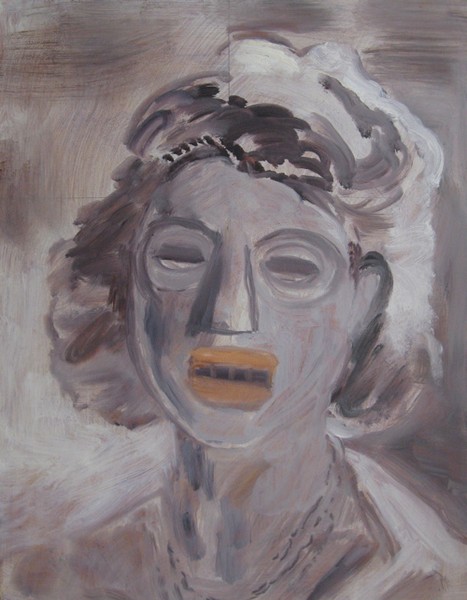 Jack Hanley Gallery is pleased to present a group showing of Liana Dragomir, Rachel Goodyear, Eleanor Moreton, and Megan Sullivan in NYC at the Watts Street space, opening  Saturday, November 14th and continuing until December 24th. Whether through the dream-like rendering of the mundane, the careful construction of peculiar coincidences, or the confusing of the patriarchal/matriarchal dichotomy, these four women penetrate the psyche and twist our constructed social norms that claim “reality.”

Rachel Goodyear’s drawings present captured moments in which characters reside within an existence where social etiquette no longer, or maybe never, applied.  Set against a stark white background, the figures are seemingly devoid of emotion or stare blankly in resignation.  Subverting norms of a different kind, Eleanor Moreton’s paintings call into question the relationship of authorative women and symbolic masculine attire.   She seamlessly glosses together polemic historical images to create new potentials.  In a similar vein, Megan Sullivan sources contemporary masculine aesthetics in her work. Drawing from the iconography of young men found in magazines, her pieces move on the verge of farce and enthusiastic passing fancy.  Liana Dragomir’s subjects are even further removed from us; depicted relaxing in hammocks or thumbing through books, their faces are blurred to preserve their anonymity and to allow us to imagine ourselves savouring such moments of “reality.”