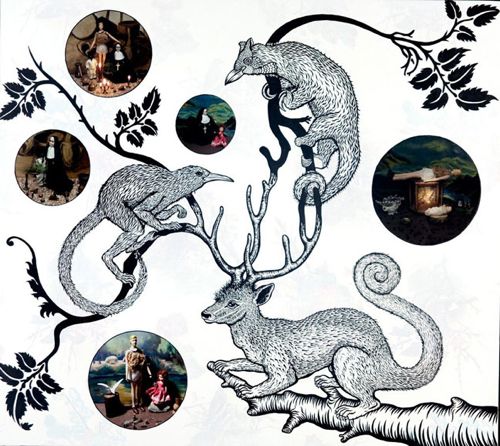 Merry Karnowsky Gallery is proud to present an exhibition of new work by
artist Lezley Saar entitled Autist’s Fables. The exhibition begins with a painting
titled “They’re Here, Get Used To It,” which sets the tone for a modern allegory
compromised of paintings, dioramas, photographs, and a short film. Saar uses
multiple mediums to create an imaginative and enigmatic environment
inspired by the sensibility, perception, and reality of her 17-year-old Autistic
daughter, Geneva.

Influenced by 19th century illustrations of animals and nature, the work
includes references to gothic literature, anatomy, biology, tattoos, cartoons,
and Art Nouveau. Saar expertly blends symbol and allegory with imagination and wit. The artist’s ethereal
work questions notions of normalcy, perceptions of reality, modes of communication, and the veracity of
emotions. The exhibition uses the body and soul approach of Aesop’s Fables where the body is the story,
and the soul is the moral.

In addition to paintings, Saar has created glass-encased dioramas resembling vintage dollhouses in which
scenes from Saar’s modern fables (based on things Geneva has said or done) unfold in miniature. With
found landscape paintings serving as the backdrops for tales unfolding within, titles like “Sorcerer’s Ritual”
and “Bad Seed Boy” describe the scenes and characters inhabiting Geneva’s imagination. In Saar’s
paintings, circular color photographs taken by the artist of vignettes within the dioramas are collaged into
the paintings, as hand painted animal creatures (Geneva’s numerous imaginary friends) are the ones
telling the tales of humans, or the Autist’s Fables.

Le Mystère de Geneviève, Saar’s short film, or court métrage, is a fairy tale which is symbolically
autobiographical as it relates to Geneva’s journey. In the words of Saar, “So much attention is focused on
the problems of autism; the tragedy of it all, how to ‘cure’ it, how to ramrod these children into being
‘normal.’ But, I find autistic people fascinating. With Autist’s Fables there’s the body; my work which tells this
story, and the soul; the moral which is that perhaps Autistic people should finally be accepted as they are.”

Saar’s work has been exhibited around the U.S. as well as in Germany, Cuba, Bermuda, and Australia. Solo
museum exhibits include The Kemper Museum of Contemporary Art, Kansas City, MO, The ContemporaryArts Center, Cincinnati, OH, Forum for Contemporary Art, St. Louis, MO, Fresno Museum of Art, Pasadena
Museum of California Art, Palmer Art Museum, PA, and San Jose Museum of Art. Her works are included in  the collections of The Ackland Art Museum, MOCA, Kemper Museum of Art, California African American
Museum, and Smith College Museum of Art.  Saar has been featured in Artforum, Art in America, The New
York Times, The Los Angeles Times, Artnews, Time Out New York, and XXL. Originally from Los Angeles, Saar is
the daughter of assemblage artist Betye Saar, and the sister of sculptor Alison Saar. She currently lives and
works in Redondo Beach, California.