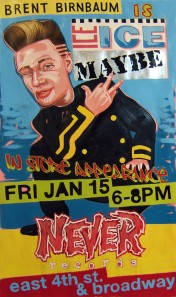 No Longer Empty is putting on a show called Never Can Say Goodbye at the (now defunct) flagship location of Tower Records at East 4th street and Broadway in money earnin’ Manhattan. I am excited to be collaborating with Brent Birnbaum in the show, as part of Ted Reiderer’s NEVER RECORDS installation.

Ted will be realizing a grand, multi-artist installation in which he will create a simulation of a long forgotten relic of the 20th Century: the record store. Ted’s project, called NEVER RECORDS, will include work and merch from a whole bunch of artists:

Where I come in is in collaboration with Brent Birnbaum. During the opening reception for the show, Brent will appear dressed as Vanilla Ice (c. 1990 of course) and do a performance which he calls ICE ICE MAYBE. The performance will resemble an “in store appearance,” where Brent will assume the character of Rob Van Winkle’s 1990’s cross-over hip hop villain/scapegoat Vanilla Ice, and he will autograph some ICE ICE MAYBE merchandise, which I had a hand in creating. I am not exactly sure whether or not he will spit some white-boy flava, but I guess there is a chance, depending on how “full of 8-ball” he is. Either way, I know for a fact that Brent has a full array of V.I.P. Posse dance moves.

For my part, I have made a couple of my poster paintings in support of Brent’s vanilla vision. One of the posters is to publicize the performance (pictured above) the other will be reproduced in 8X10 form and autographed for fans willing to wait in line and thus “participate” in Brent’s Rob Van Winkle re-awakening.

Never Can Say Goodbye will open on January 15th from 6-8PM, and be open for at least a month. No firm end date has been established as of now. The show will be in the old Tower Records location on the northeast corner of East 4th street & Broadway.

In addition to the artists participating in NEVER RECORDS, the following other artists are also contributing to Never Can Say Goodbye: