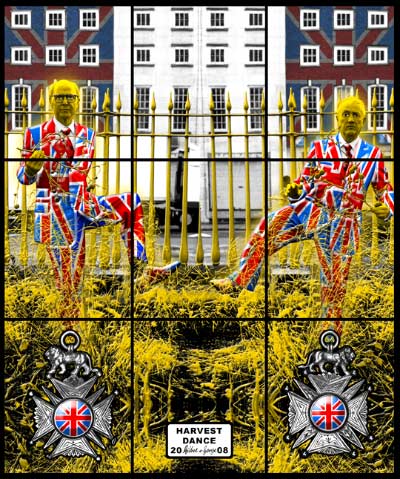 The Baronian_Francey gallery has the enormous pleasure and honour of announcing the exhibition of works from the latest series to date by Gilbert & George: Jack Freak Pictures.
In this latest series, which contains the largest number of pieces so far, Gilbert & George continue to explore themes that have been precious to them for a number of years. For them, everything concerning life is a potential subject for their art. In these recent works they have continued to break down the rules of social propriety with a calmness and a detachment that are very English.

In these images, the English flag, the map of the district of East London (Fournier St.) where their studio is located, trees, graffiti and medals are all subjects from which they draw an intriguing and universal narration. As very often happens in their work, the artists are once again protagonists of the pieces. Their faces and their bodies appear in numerous images. Thanks to computer processes they are represented in a stylized and often distorted way in a metaphor of human beings attached to their social, religious and sexual norms. Some of these new pieces make the images explode into fragments before melting them down again into new fascinating kaleidoscopic shapes mixing the monstrously grotesque with an ornamental jumble reminiscent of sacred art.

Gilbert, born in 1943 in Italy in the city of San Martino, and George, born in 1942 in Devon, England, met in 1967 in the sculpture courses of Saint Martin’s School of Art at Oxford. For more than 40 years, they have lived and worked together in London, the two making up a single artist, Gilbert & George.
In 1969 they created their first Singing and Living Sculptures in which they were simultaneously subject and object, refusing to separate their performances from their everyday life. By this act, they revolutionized the very practice of sculpture.
The first black and white photographs appeared at the beginning of the 1970s: large photo-montages consisting of panels geometrically divided into rectangular boxes defined in black in the style of stained glass windows. It was these photos that brought them international renown.
Around the end of the 1970s, they decided to introduce the colour red into them, and in the 1980s the colours evolved, as yellow, pink and blue made their appearance, while the imagery became more complex and the levels of meaning multiplied. These photos generally contain portraits of the artists themselves and are an opportunity to turn taboo subjects such as sexuality, race, religion, national identity, politics, etc. into irony.
During the last few years their retrospective has travelled in Europe and the United States, from the Tate Modern in London to the Brooklyn Museum of Art in New York, appearing also at the Haus der Kunst in Munich, the Castello di Rivoli in Turin, the Milwaukee Art Museum, the de Young Museum in San Francisco, and the Philadelphia Museum of Art. In 2005, they represented Great Britain in the Biennale of Venice.