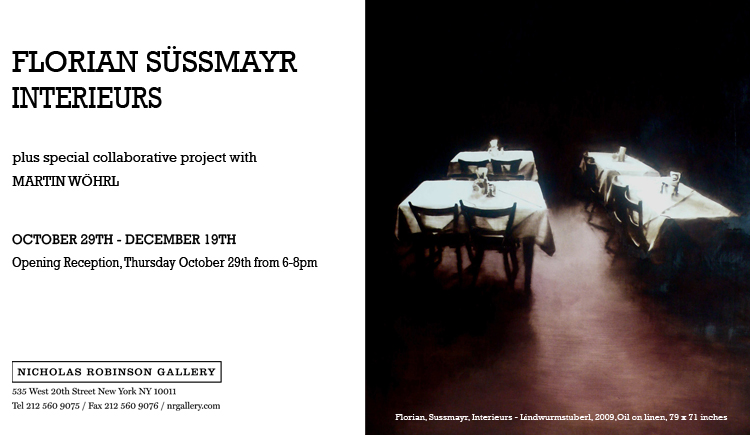 The current exhibition, entitled Interieurs, focuses both the artist’s and viewers’ attention on various iterations of interior spaces, one of the traditional genres of art history. Frequently de-populated and executed with the artist’s characteristic somber palette of monochromatic dark browns, Süssmayr’s interiors create an evocative atmosphere that is simultaneously disquieting, banal, and even, on occasions, gloomy or sinister. His fleeting glimpses of these spaces are often ambiguous – both artist and viewer participate in the viewing of the scene and yet are somehow also clearly excluded from belonging in them.

A number of the paintings tackle another traditional genre – that of the self-portrait. The artist is depicted either as a reflection in a surface in which he is photographing himself, or as part of a pin-board collage containing an image of himself and other biographically relevant images or references. The depiction of self is thus never direct, and continues the theme of detached observation and exclusion.

Florian Süssmayr has his roots in the social and political subculture pervasive in Germany in the 1980s. Originally a musician in the leftist post-punk scene, he has also been a film cameraman, and began painting in the late 1990s.

Süssmayr has had a solo exhibition at the Haus der Kunst in Munich, and has participated in numerous other important gallery and museum exhibition in the last five years.

Florian Süssmayr was born in 1963 in Munich, Germany, and lives and works in Munich.