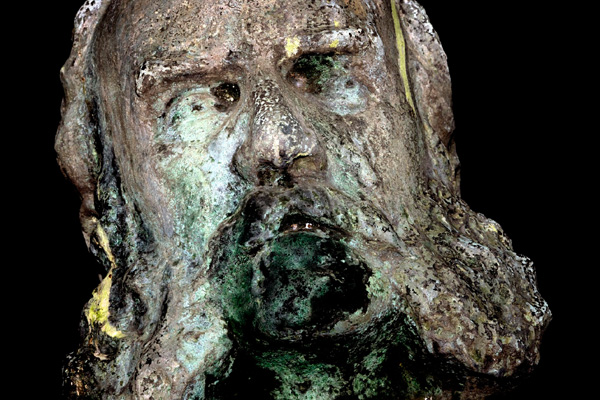 Upon first glance, the faces in Männikkö’s new series appear ghostly, hauntingly expressionless and discoloured, calling to mind the blue pallor of a drowning victim or the blackened skin of a coal miner returning from a day at work.
For Blues Brothers, Männikkö photographed the statues of Milan’s famed Cimiterio Monumentale (Monumental Cemetery), known for its artful crypts and honourable dead. Strikingly human, the subjects of Männikkö’s series are in a state of beautiful yet disturbing decay, weathered by years of exposure to the elements. In one image, the original patina of brushed metal is still visible, while green moss begins to creep around the features of the sullen face; in another, a carefully down-turned mouth is rendered into an even more tortured expression by the tinted oxidation of the figure’s chin and facial hair. Männikkö’s portraits show a poignant vulnerability, and the marred faces seem to betray an animated life once lived; they become death masks sheathed in the elements of nature, the very forces of which cast a life cycle onto the presumed permanence of the memorial stone relief and bronze work.

As in his previous series, Männikkö has mounted the photographs from Blues Brothers in heavy, often found frames, a display tactic more readily associated with classical painting than contemporary photography. Framed in vintage wood, Männikkö’s photographs do not read as harbingers of truth; rather, the specific presentation of the images blurs the documentary quality inherent to photography, furthering the ambiguity of the depicted faces. In this new series, Männikkö transforms sculptural objects into men, producing characters wrought with sorrow, suspended between life and death.

The figures in Blues Brothers are without a setting; their faces occupy the entirety of the frame and they are shown against a neutral black or grey background. This is a departure from Männikkö’s earlier work, in which the setting of the photograph sheds important light on the depicted characters. In his series of Finnish bachelors, for example, Männikkö shows the solitary men in their homes, surrounded by personal objects in a seemingly everyday arrangement. Borrowing from classical portraiture, these objects serve as attributes for the men themselves, cluing the viewer in on different aspects of the subject’s life and providing the means by which a narrative might be strung together. For another series, MEXAS (1996-97), Männikkö photographed people living in the United States near the Mexican border, set against the backdrop of their own homes or the local landscape. When aligned through Männikkö’s lens, the subject’s faces and their surroundings build a myth of belonging, of arriving at a place called home, yet still tinged by an ambiguous air of discomfort or displacement.

The ambiguity of truth in Blues Brothers and MEXAS also calls to mind Männikkö’s previous series, Harmony Sisters (2004-ongoing), in which the artist photographed fragments of live animals—a mouth, a hide, an eye, etc.—documenting the outer anatomy of an array of creatures. The resulting images provide a macro view that is rarely straightforward: a lolling tongue could belong to a cow or horse, a roll of skin and patch of fur to a variety of beasts. In this way, Männikkö’s works possess many truths that demand to be weighed against one another.

Männikkö himself has said that the picture confirms whether or not an object is real. Indeed, after careful inspection, the men of Blues Brothers reveal themselves to be neither dead nor alive; rather, they emerge as very real sculptural objects, subject to the inevitable process of aging, much like the men whose graves they mark.

Esko Männikkö was born in 1959 in Pudasjärvi in the northern part of Finland. He lives and works in Oulu. In 2008 he was awarded the prestigious Deutsche Börse Photography Prize. The same year he presented “Cocktails 1990-2007” at Millesgården, Lidingö, Kulturhaus, Lulea and Bomuldsfabriken Kunsthall Arendal. Other solo exhibition include Finsk-Norsk Kulturinstitutt, Oslo, 2004, the Hasselblad Center, Gothenburg, 1999, the Malmö Konsthall, 1997, as well as Portikus, Frankfurt/Main, De Pont, Tilburg and Lenbachhaus, Munich, all 1996. He has taken part in numerous international exhibitions including the Venice Biennial, 2005, Johannesburg Biennial, 1997, São Paulo Biennial, 1998, “Contemporary Photography II: Anti-Memory,” Yokohama Museum of Art, 2000, “Beyond Paradise,” Shanghai Art Museum, 2003, Liverpool Biennal, 2004, “SEEhistory. Der private Blick,” Kunsthalle z u Kiel, 2005, and the travelling exhibition “Investigations of a dog,” organized by the Fondazione Sandretto Re Rebaudengo (2009-2010). Männikkö had numerous solo exhibitions at Galerie Nordenhake in Stockholm and Berlin.

One thought on “ESKO MÄNNIKKÖ”