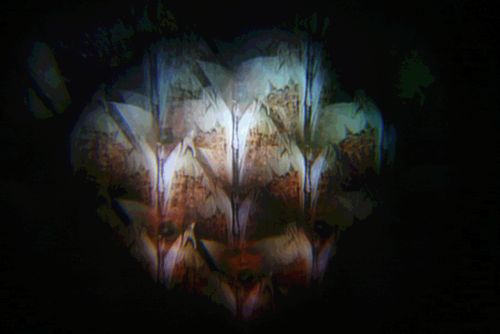 Ventur is recognised for creating complex environments and installations that raise questions regarding time and space, whilst exploring the subject in relation to historical and contemporary technologies. In a recent work This is My Life (Shirley Bassey) Ventur downloads numerous pieces of footage from YouTube of Bassey singing “This Is My Life” throughout stages of her career. The films are concurrently filtered through slowly spinning crystal prisms suspended in front of the projectors to create an immersive environment of multiple moments, offering the viewer a conflated experience of past and present. Other performers that have been the scrutiny of Ventur include Marlene Dietrich, Marilyn Monroe and Elvis Presley; sometimes tragic characters whose subjectivity is fragmented through their fame. Captured on film these historical characters preserve a collective experience of sadness and loss, amalgamating the past with contemporary significance. For his exhibition at ROKEBY Ventur presents brand new work including a new installation using footage of Nina Simone performing “For A While”, a song about a past lover that the singer cannot forget. Commenting upon loss, tragedy, memory and love the work encapsulates the stars potential to make private moments, public, exposing the collective sadness implicit in the lyrics. The Internet from which Ventur selects his footage exists as a collective space that is in constant flux and which disrupts the perception of a continuous flow of time. It is no coincidence that the artist uses technology that offers multiple non-hierarchical temporalities in his installations; immersive environments, which present the viewer with an expanded cinematic narrative that questions our sense of reality, perception of history and the passage of time. In an on-going project, Ventur turns to the history of archival film footage and investigates film-based portraiture through revisiting Andy Warhol’s Screen Tests. Ventur films living Screen Test subjects in the same manner as the originals created some forty years ago. Not necessarily recognizable as the ‘star’s’ that they were in Warhol’s time, these characters point to Ventur’s own perception of fame, notability and contemporary art. Billy Name’s Screen Test will be seen at Rokeby alongside that of Bibbe Hansen. For Ventur the passage of time is magnified and past and present are united in a narrative that connects the two. Conrad Ventur (b. 1977, Seattle) currently lives and works in New York. He received his MFA from Goldsmiths College, London (2008) and has recently exhibited at Forever and Today Inc. New York (2009), The Andy Warhol Museum, Pittsburgh (2009); P.P.O.W, New York (2009); 1/9 Unosunove Arte Contemporanea, Rome (2009); Architecture Annual, Bucharest (2008); Arti et Amicitiae, Amsterdam (2008); Louis Blouin Institute, London (2008); Invisible-Exports, New York (2008); Ludlow 38, Kunstverein Munchen Goethe Institute, New York (2008); Somerset House, London (2008); and Stockholm Konsthall, Sweden (2008), among other international solo and group exhibitions. In 2004, Ventur launched the contemporary art magazine USELESS.