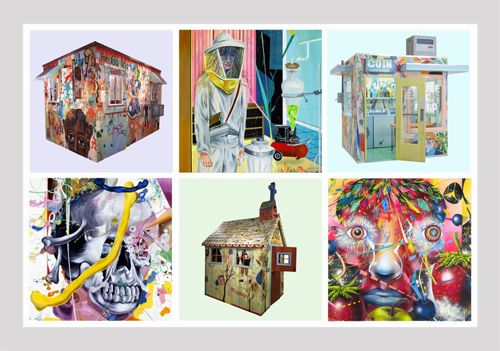 MADISON, WI – Clayton Brothers: Inside Out, a new major exhibition at the Madison Museum of Contemporary Art, presents twenty-six paintings and three mixed-media installations created collaboratively by Rob and Christian Clayton. The Clayton Brothers construct complex narratives that introduce memorable characters and comment wryly on contemporary life. The exhibition, which is organized by museum director Stephen Fleischman, will be on view in the museum’s main galleries from September 12, 2010, through January 2, 2011.

Clayton Brothers: Inside Out is the first museum survey of the brothers’ work. It presents works from the six major series created collaboratively by Rob and Christian Clayton since 2001, beginning with the installation piece Tim House (In Green Pastures)–in the collection of the Madison Museum of Contemporary Art–and concluding with the bold, large-scale canvases of the Jumbo Fruit series. Series titles suggest the disquiet or irony–or often both–that characterizes the individual works. Works in the As Is are connected by the concept of people, like houses or other objects available for purchase, being presented in “as-is” condition, while the Patient series portrays the subjects and ramifications of the medical industry with both humor and dismay.

Stephen Fleischman says the work of the Clayton Brothers has “consistently been informed by vivid color and an eccentric cast of characters.  The result is an obsessively rich body of work that strikes universal chords, but remains deeply personal. Front and center are the unique people, animals, and places that occupy the outskirts of the American psyche.”